A collaboration between researchers at Yale University and Barcelona’s Institute of Photonics Sciences (ICFO) has made a graphene-based device that could result in tiny new uncooled detectors operating in the mid-infrared spectrum.

The Yale-ICFO team’s sensor, operating at 12.2 µm in the heart of the mid-IR spectrum, consists of arrays of plasmonic resonators. Measuring just 5 µm by 5 µm, the devices have shown good low-noise performance at room temperature, without any cooling.

“It is fabricated using large-scale graphene and possesses a simple two-terminal geometry, representing an essential step towards the realization of an on-chip graphene mid-infrared detector array,” reports the collaboration - led by ICFO’s Javier Garcia de Abajo and Yale’s Fengnian Xia - in a paper just published in the journal Nature Materials.

Gigahertz speeds
The ICFO researchers say that they have been able to boost sensitivity by exploiting the resonant coupling between mid-infrared light and graphene plasmons.

The team fabricated the sensors on a graphene wafer, with the disk-shaped plasmonic resonators inter-connected by what are described as “quasi-one-dimensional graphene nanoribbons”.

And when they shined a mid-infrared light source onto the setup, they observed excitation and absorption of infrared plasmons on the surface of the graphene resonators and nanoribbons - at room temperature.

They also observed that, thanks to the graphene nanostructures, the absorption of light that was being converted into an electrical response was strongly linked to the level of the plasmonic absorption, with response times enabling detection at gigahertz speeds.

In conclusion, the team observed: “The results of this study prove graphene to be an excellent material for ultrafast conversion of light to electrical signals at room temperature, triggering the development of very small-sized detectors that could be easily integrated into high-resolution mid-infrared cameras or high density integrated infrared photonic circuits.” 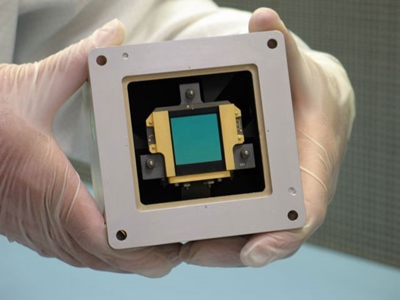 Mid-IR applications
If the technology can be developed to that point, it ought to prove extremely useful - and potentially disruptive - by enabling ultra-compact equipment capable of identifying molecules according to their signature vibrational and rotational excitations.

That would include hazardous and biological molecules, with the ICFO team suggesting applications in security, bioassays, and air quality monitoring.

One example application of mid-infrared spectroscopy is on board the James Webb Space Telescope (JWST) now being prepared for launch in 2020. JWST's "MIRI" instrument covers the 5-28 µm spectral region, and is set to investigate red-shifted light from distant galaxies, as well as newly forming stars and faint comets.

MIRI's detector (shown right) is based on arsenic-doped silicon sensors made by Raytheon Vision Systems, with a complex cryogenic cooling arrangement provided by a combination of a pulse tube pre-cooler and a Joule-Thomson loop heat exchanger to reach 7 K.