But 16% growth rate in 2021 expected to slow on macro uncertainty and work-through of stockpiled components. 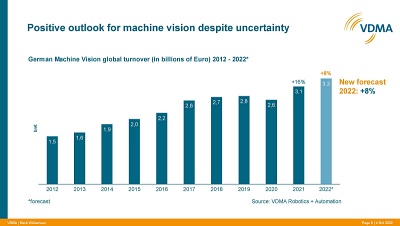 The annual value of the machine vision sector in Germany is expected to reach €3.3 billion in 2022, having broken through the €3 billion barrier for the first time last year.

That’s according to Mark Williamson, the manager director of Stemmer Imaging, and chairman of the VDMA Machine Vision Board.

Speaking at the opening of the VISION trade fair taking place this week in Stuttgart, Williamson pointed to an industry that continues to grow quickly despite a multitude of macroeconomic and geopolitical concerns.

Stockpiled supplies
Although the market shrank around 4 per cent in 2020 as a consequence of the Covid-19 pandemic, it bounced back strongly in 2021 with 16 per cent growth - and the sector’s value jumping from €2.6 billion to €3.1 billion.

However, Williamson warned that part of the reason for the bumper year - which exceeded the VDMA group’s prior expectations of a 7 per cent rise - was likely due to stockpiling of components in short supply.

It means that the German market for machine vision components and systems has grown at a compound annual growth rate in excess of 8 per cent over the past decade, more than doubling from the €1.5 billion figure recorded in 2012.

Those VDMA figures are based on survey data from participating companies, with Williamson saying that more than 60 companies (with a combined turnover of €1.6 billion) contributed to the latest annual round-up. More than 40 companies also provide “short survey” data on a monthly basis.

2023 uncertainty
Current indications from the recent monthly data suggest that the market could grow by a further 10 per cent in 2022, although Williamson said that VDMA had “tapered” its prediction to 8 per cent because of the various macro uncertainties and the potential oversupply situation.

As a result of that caution, the VDMA Machine Vision Board has also decided not to make a formal prediction for 2023, although the current line of thinking suggests similar growth to 2022.

That market value is largely dominated by sales of cameras, which VDMA’s figures suggest account for 29 per cent of the sector currently. Optics used in the machine vision systems represent 5 per cent of the total, or approximately €165 million. 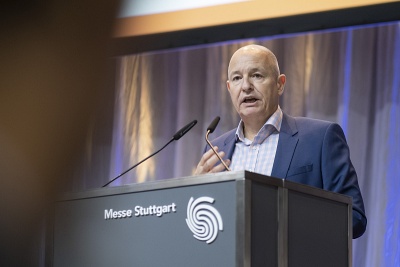 Camera vendors galore
Williamson said that among the key trends to look out for in the near future were growing sales of 3D cameras, which only account for 3 per cent of the market at the moment but are expected to find strong traction in factory automation settings.

Other growth areas include deployments of cameras extending into short-wave infrared (SWIR) wavelengths, along with multispectral and hyperspectral vision systems, and embedded vision. Electric vehicle production is expected to provide plenty of new applications.

In terms of applications the industry also remains highly German-centric, with Germany itself accounting for 30 per cent of the country's sales of machine vision components and systems. Exports to China rank second, with a 15 per cent share, and North America 14 per cent.

Evidence of the market growth is apparent at the VISION trade show itself, with organizers Messe Stuttgart pointing to a 25 per cent increase in floor space compared with the previous event, occupied by more than 400 exhibitors across two halls. This year’s event is the 30th edition in the sequence.

According to Mark Radford, vice president at holding company TKH Vision - the owner of industrial camera firm Allied Vision and several other machine vision companies - over 130 camera vendors are taking part in this year’s trade show.

Radford said that thanks to technological developments in the sector there was an “explosion of options” for companies now looking to deploy machine vision across a wide variety of applications.