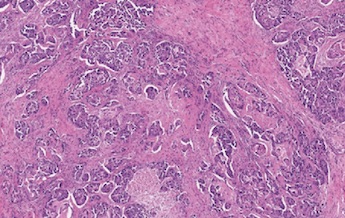 Diffuse reflectance spectroscopy (DRS), in which the diffuse and scattered light returning from a sample can reveal details of its composition, has been widely studied as a means to measure hemoglobin concentration and oxygenation of blood.

This makes it potentially valuable in cancer diagnosis, since the development of blood vessels within a malignancy is closely connected to the growth of the tumor. The same blood vessels could in theory offer a means to monitor the effectiveness of therapy as well.

The ways in which the diffuse spectra change following treatment has been less studied than the spectra of the growing tumors themselves, however, making it more difficult for clinicians to be certain of what the imaging data is revealing once therapy begins.

A study at the Netherlands Cancer Institute has now examined the effects of neoadjuvant chemotherapy—medicines administered before any actual surgical procedures, rather than afterwards—on the optical characteristics of ex vivo breast cancer tissue samples. The work was published in Journal of Biomedical Optics.

On an initial sample of 92 breast specimens, the project collected DRS measurements using illumination between 400 and 1600 nanometers from patients who had received neoadjuvant chemotherapy and from patients who had not. Analysis with generalized estimating equation (GEE) models was then carried out, using either the intensity at a specific wavelength or a fit parameter as input, and the measurements of patients with and without neoadjuvant chemotherapy were compared.

Results showed that the neoadjuvant chemotherapy made no significant difference to the ability of the DRS spectra data to reveal blood vessels and the nature of blood supply within the tissues, when that data was directly correlated with traditional histopathology examination.

"The results show no evidence for a profound effect of chemotherapy on the optical measurements," commented the project in its published paper.

Such a platform could provide a valuable multi-modal imaging system able to classify breast lesions detected during mammography screening in a non-invasive manner, and significantly improve the ability to identify malignancies.

The new DRS study now indicates that tumor-margin assessment by the DRS technique has also become a feasible consideration during breast-conserving surgery, even if the patient has received neoadjuvant chemotherapy prior to surgery, a procedure that has become commonplace. The ultimate goal would be the intra-surgery application of DRS analysis, according to the project team, allowing the surgeon to assess the tissue while performing the resection of tumors and ensure that the resection margin is clear of tumor tissue.