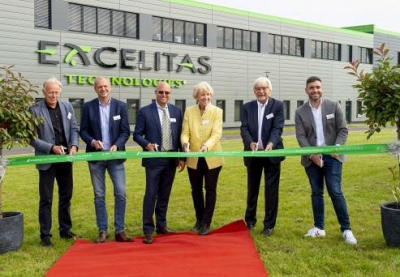 Qioptiq Photonics has officially opened a new 4.5 acre site at Göttingen Science Park in Germany that will allow it to expand production of complex optics and optomechanical systems.

It follows a €30 million investment by parent company Excelitas Technologies, which acquired Qioptiq back in 2013.

With €25 million invested in facilities and an additional €5 million on capital equipment, including a photovoltaic system, a state-of-the-art automated material warehouse, and an ultrasonic cleaning system, the company says it meets the highest cleanliness standards for optical components in the semiconductor industry.

“The newly constructed, tailor-made production facility offers 72,000 square feet of space, including 16,000 square feet of dedicated Class 5 cleanrooms to meet very high cleanliness requirements,” announced Excelitas, adding that there was scope for further expansion at the site, if and when that is needed.

Ribbon-cutting
The move follows construction of new cleanrooms at another Qioptiq facility in Göttingen over the past decade. Together, the two state-of-the-art sites now provide a combined 28,000 square feet of cleanroom production space for assembling optical and optomechanical systems, as well as coating and other optical production processes.

Specific applications of the optical components produced at the sites include tools used in semiconductor device fabrication, for example lithography, wafer inspection, chip bonding, and packaging.

“Our decision to invest in a new production building underscores the strategic importance of the Göttingen site within the Excelitas business. The new building offers optimal conditions for commissioning additional cleanroom capacities, which are essential for our further growth as a high-tech company.”

Excelitas’ COO Joel M. Falcone added: “Despite the significant complexity of this project requiring highly qualified external and internal resources in the midst of a global pandemic, all parties, including strong local government support, have worked together to complete the construction of our new facility on time and on budget.”

In addition to the Göttingen expansion, Excelitas recently completed its acquisition of camera maker PCO, which is based in Kelheim, Germany.