Profits up at Lumibird despite lidar slip 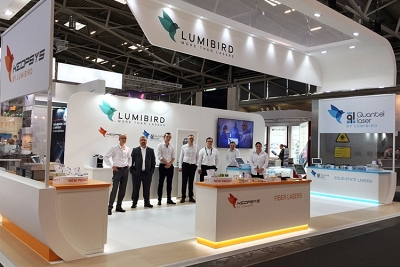 The Paris-listed laser firm Lumibird has reported a sharp increase in profitability, thanks to a combination of markets recovering from the Covid-19 pandemic and the successful integration of 2020 acquisition Ellex within its medical division.

The company’s stock price rose in value by around 7 per cent after CEO Marc Le Flohic and colleagues revealed a net income of €5.1 million in the first half of 2021.

That compared with a net loss of €1.9 million in the equivalent period of 2020, which included widespread shutdowns as the world reacted to the initial impact of the pandemic.

Partly as a result of the addition of Ellex, total company sales jumped by 65 per cent, to €74.5 million, with earnings before interest, tax, depreciation and amortization (EBITDA) near-doubling to €14.3 million.

Lidar sourcing delays
Lumibird’s photonics division accounted for €34.7 million of that total, up 16 per cent on last year as sales to industrial and scientific markets rose nearly 40 per cent, to €17.1 million.

Sales into defense and space applications also showed a strong increase, with the overall division able to off-set a marked contraction in sales of lidar products and post an EBITDA figure of €6.7 million. Lumibird said that its previously fast-growing lidar business had been hit by sourcing delays.

Acquired for €62 million in mid-2020, the Australia-based laser and ultrasound equipment firm Ellex helped push Lumibird’s medical division sales to €40.7 million - more than double the €15.8 million figure posted for the first half of 2020.

That translated to an EBITDA of €7.6 million for the medical division, up from €2 million a year ago.

Expansion plan
In an investor presentation accompanying the latest results, Lumibird pointed to successful cross-selling, a boom in orders for ultrasound equipment from the US, and a sharp increase in sales of Quantel-branded lasers for glaucoma treatment in Europe as some of the key reasons for the strong performance.

An increase in research and development capacity is also in progress, with a new €7 million, 6000 m2 research and production site just completed.

With around €80 million in cash on the firm’s latest balance sheet, Lumibird’s executive team is confident of expanding the business rapidly - reaffirming the target of doubling sales revenues between 2020 and 2023.

That would imply annual sales approaching €300 million two years from now, a target that should be helped by the pending acquisition of Saab’s laser rangefinder business, and the 37 per cent stake in Orleans-based lasers and optronics firm CILAS that was acquired by Lumibird in July.

• In late trading on the Paris stock market September 22, Lumibird's stock price stood at just over €18 - equivalent to a market captitalization of around €400 million.