Novel microscopic source “offers advantages over other lasers”, with applications in integrated photonics and optical sensors. 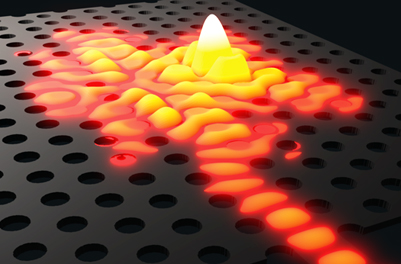 Scientists from Danish research institute DTU, based in Lyngby, Copenhagen, have shown that a Fano laser, a new type of microscopic laser, has “fundamental advantages compared to other types of lasers.”

The discovery can be important for many future applications, such as integrated photonics, interfacing of electronics and photonics, and optical sensors.

An increasing fraction of the global energy consumption is used for information technology, and photonics operating at very high data rates with ultra-low energy per bit has been identified as a key technology to enable sustainable growth of capacity demands.

However, existing laser designs cannot just be scaled down to reach the goals for next-generation integrated devices, and fundamental discoveries in the field of nanophotonics are therefore needed.

Supported by a Villum Center of Excellence, NATEC, a newly established DNRF Center of Excellence, NanoPhoton, and an ERC Advanced Grant, scientists from DTU are exploring the physics and applications of a new class of photonic devices using a phenomenon known as Fano interference. This physical effect offers an opportunity for realizing ultrafast and low-noise nanolasers (called Fano lasers), optical transistors, and quantum devices working at the level of a single photon.

Now, the DTU scientists have shown that the coherence of a Fano laser can be significantly improved compared to existing microscopic lasers. The result has been published in Nature Photonics.

“The coherence of a laser is a measure of the purity of the colour of the light generated by the laser. A higher coherence is essential to numerous applications, such as on-chip communications, programmable photonic integrated circuits, sensing, quantum technology, and neuromorphic computing.

Mørk added, “The Fano laser, with a size of a few microns across, operates in an unusual optical state, a so-called bound-state-in the-continuum, induced by the Fano resonance. The existence of such a state was first identified by some of the early pioneers of quantum mechanics, but evaded experimental observation for many years. In the paper, we show that the characteristics of such a bound-state-in-the-continuum can be harnessed to improve the coherence of the laser.”

“The observation is somewhat surprising,” said lead author and senior researcher at DTU Fotonik, Yi Yu, “since a bound-state-in-the-continuum is much less robust than the states commonly used in lasers. We show in our paper, experimentally as well as theoretically, that the peculiarities of this new state can be used to advantage.”

“It is the physics of Fano resonance combined with this technology that eventually enables the suppression of quantum noise, leading to the highest measured coherence for microscopic lasers.”

This new finding may lead to the use of Fano lasers in integrated electronic-photonic circuits, in particular in new generations of high-speed computers. In today’s computers, electrical signals are used for logic operations as well as for transmitting data between different parts of the computer. However, due to ohmic losses, a lot of energy is wasted in the transmission.

The primary role of the Fano laser will be to convert the electrical data to light signals, which then are transmitted within the computer almost without loss – just as it is done in optical fibres on the internet today. The long-term perspective is to get much faster computer chips with minimal energy consumption.

The researchers from DTU Fotonik were historically the first in the world to suggest and experimentally demonstrate a Fano laser. Those results were published in Nature Photonics in 2017.