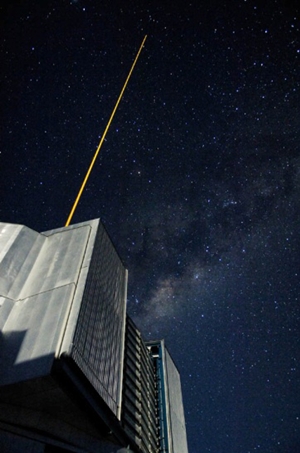 Toptica Photonics, the laser diode and systems developer based in southern Germany, has won a contract to develop a new type of laser for the European Southern Observatory (ESO) in Chile.

Under the €5.2 million deal, Toptica will work with MPB Communications to produce a solid-state laser operating at 589nm – the key wavelength needed to produce a so-called laser guide star.

Guide stars are a crucial part of the adaptive optics systems in development at ESO and many other observatories around the world. By reproducing the wavelengths of light produced by distant stars, they allow optical telescopes to correct for the distortions produced by the Earth’s atmosphere.

Optical systems already used to produce guide stars are typically based on either dye lasers or sum-mixing of solid-state lasers. However, both of these systems have their drawbacks – dye lasers are inefficient and require regular maintenance, while sum-mixing is of limited output power.

Instead, Toptica will develop a new solid-state system producing more than 20W output, based on frequency-doubling of a Raman fiber amplifier that operates at 1178nm.

Just such an amplifier has already been developed, by MPB Communications, a laser company based in Québec, Canada, while Toptica claims to be able to double the operating frequency with a conversion efficiency of more than 80%.

Over the next three years, Toptica and MPB will build four frequency-stabilized laser systems for the guide star project, which will then be installed inside the ESO’s Very Large Telescope (VLT).

Aside from its application in astronomy, Toptica president Wilhelm Kaenders believes that there may be further commercial applications in the pipeline: “The reduction in complexity leads to an industrially reliable concept, with good scalability for future demands,” Kaenders noted.

With funding provided in part via the European Commission’s FP7 framework, the laser systems are expected to be deployed in September 2013.

In the mean time, a significant market opportunity may develop for Toptica in the astronomy sector, as many other national and international observatories are expected to equip telescopes with adaptive optical systems based on laser guide stars in the coming years.