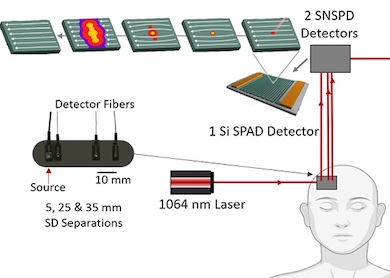 Diffuse correlation spectroscopy (DCS) is a valuable way to measure cerebral blood flow, through the fluctuations and speckle patterns generated by moving red cells when blood vessels are illuminated with near-infrared light.

A project at Massachusetts General Hospital (MGH) and MIT Lincoln Laboratory has now tackled one of the remaining hurdles, the low signal to noise ratio (SNR) usually inherent in the technique. The work was published in Neurophotonics.

An ideal clinic-friendly DCS architecture would involve at least 30 millimeters distance between source and detector (SD separation) and illumination wavelengths above 1000 nanometers, according to the researchers. But current limitations in signal-to-noise ratio and photon efficiency hinder developers from reaching these values.

Alterations to detector layout and wavelengths employed have been investigated, but silicon single-photon avalanche detectors (SPADs) have low photon efficiencies, and alternative sensors such as InGaAs cameras are not fast enough for the DCS technique.

"SNSPDs operate below the boiling point of liquid helium, and consist of a thin film of superconducting material patterned in a compact geometry to create a large pixel with high detection efficiency and a high single-photon sensitivity due to the nanoscale cross-section," noted the project in its published paper.

"They have recently been used in fluorescence lifetime imaging microscopy, but never before in biomedical applications. To our knowledge, this is the first application of SNSPDs in humans to improve DCS performance."

To test the new approach, an experimental platform was designed in which both SNSPD-DCS and conventional SPAD-DCS were applied to the same patients, using a 1064-nanometer source for the former and a 850-nanometer source for the latter. Measurements were taken from the patient's forehead, and backscattered photons were collected at 5, 25, and 35 millimeters from the source.

Results showed considerable photon gain with the new architecture, with 7 to 8 times more returning photons available at the detector when using 1064 than at 850 nanometers, according to the team. Combined with the inherently higher photon detection efficiency of the SNSPD, the experiment ultimately detected 13-times more photons and demonstrated an average SNR gain of 16 compared to the existing technique.

"The increased SNR of the SNSPD-DCS at 1064 nm allowed us to resolve clear arterial pulsation at 20 hertz at a 25 millimeter SD separation in all subjects," recorded the project, which anticipates new clinical uses arising from the modified technique.