Method from Universities of Florence and Glasgow allows quantitative analysis of brain-wide architecture. 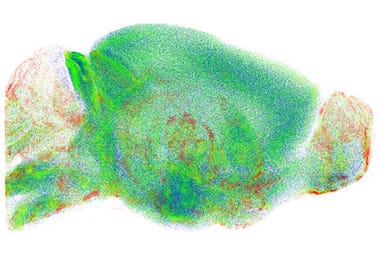 Image collection is an increasingly automated operation in many applications, and in bioimaging workflows a drive to automate various stages of the process can assist with sample throughput and accurate visualization.

Autofocus (AF) techniques are an important example, used to maintain image sharpness throughout the acquisition of data from fragile biological systems.

A project at the University of Florence and the University of Glasgow has applied an autofocus methodology to light-sheet microscopy (LSM) of intact optically cleared mouse brains, proving that it can be of use in analysis of large specimens.

As described in Nature Methods, the technique can be applied not only to LSM but also to in vivo fluorescence imaging or 3D tracking of fast-moving organisms.

The project's solution is christened Rapid Autofocus via Pupil-split Image phase Detection, or RAPID, a new AF technology compatible with light-sheet microscopy and other wide-field modalities, capable of correcting the misalignment introduced by the sample itself in real time.

RAPID, initially investigated at the University of Florence in 2017 and now patented jointly by the university, the European Laboratory of Nonlinear Spectroscopy (LENS) and Italy's CNR research council, involves the division of light passing through the microscope pupil into two halves using a wedge plate prism.

If the alignment of the two RAPID images from the separate ray bundles is monitored, then arrival of out-of-focus light from a source away from the LSM's in-focus image plane reveals itself as lateral motion of the two images. The magnitude of this displacement relates directly to the amount of defocus, offering a route to rapidly correcting the defocus through automated feedback to the LSM platform.

In the new trial, the project applied RAPID to LSM imaging of intact optically cleared mouse brains and achieved subcellular resolution, indicating that the high resolution guaranteed by this approach can allow researchers to study on a whole-brain scale problems previously analyzed only in small, local areas.

Further tests employed RAPID to characterize microglia, a set of cells in the brain with different functions whose shape changes according to the role they play. Analysis of microglia with RAPID revealed significant differences between various brain regions, paving the way for new studies on the role of this cell population.

"While we originally invented RAPID for light-sheet microscopy, this autofocusing technology is actually suitable for all wide-field microscopy techniques," commented Caroline Müllenbroich from the University of Glasgow. "It is very versatile and sample-agnostic, with multiple applications beyond neuroscience."