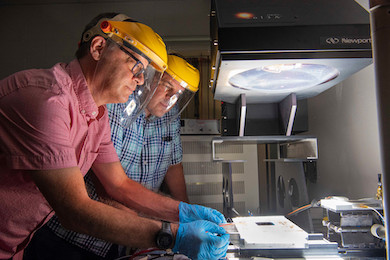 Backed by $14 million from the US Department of Energy, the Perovskite Photovoltaic Accelerator for Commercializing Technologies has been created to improve the understanding of perovskite-based solar cells and determine the best tests to evaluate the new solar panels' lifetimes.

Thin-film perovskite materials are increasingly attractive as alternatives to silicon solar cells, thanks to their potential for creating flexible photovoltaic materials that require less energy to manufacture.

In November 2020, discussing a new Stanford University manufacturing technique for perovskite cells, Stanford's Nick Rolston commented that "Millions of dollars are being poured into startups. But I strongly believe that in the next three years, if there isn’t a breakthrough that extends cell lifetimes, that money will start to dry up."

Determining the best tests to evaluate the new solar panels' lifetimes is one stated goal of the new SNL-led research center.

"Right now it's the Wild West"

"Perovskite photovoltaic technologies may provide a pathway to low-cost manufacturing, but there is still much that is unknown about this technology, especially in terms of outdoor performance and reliability," said SNL's Joshua Stein, leader of the new project.

The center will field-test and monitor perovskite technology using a common set of testing protocols, with the goal of allowing every device to be fairly compared. These reliability tests will be led by the National Renewable Energy Laboratory (NREL), a partner in the new center.

"NREL’s role in leading the reliability focus area is to provide a lot of the scientific basis behind understanding reliability in perovskite-based solar modules,” said Laura Schelhas of NREL, deputy director of the center. "This means looking at the degradation of these materials in contrast to traditional solar cell materials, what is causing this degradation, how to test for it and how to accelerate it in a meaningful way for the tests."

The center, whose other partners are Black and Veatch, CFV Labs, Los Alamos National Laboratory and the Electric Power Research Institute (EPRI), intends to test at least 30 perovskite modules in the first year, eventually expanding performance testing to at least 50 kilowatts of perovskite-based photovoltaic modules and full systems.

“Right now, it’s like the Wild West,” said Stein. "There are no established standards or test protocols for assessing perovskite solar modules. We would like to craft a clear set of test protocols that have been validated and vetted by the industry to create a rubric or set of goal posts, so that companies that are getting into perovskite solar technologies know what they need to do."