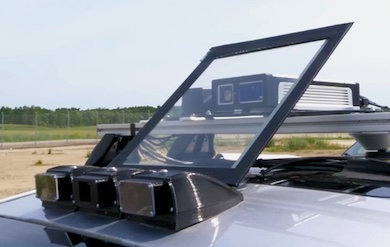 AEye, developer of a long-wavelength lidar platform for autonomous vehicles, has announced the results of its system's latest performance test.

Kilometer-range was one of AEye's headline goals for its lidar platform when the Californian start-up announced the raising of $40 million in venture funding in November 2018, having previously been backed by the venture wings of Intel and Airbus.

AEye commented that the new test was conducted using VSI's research vehicle, which integrated AEye’s sensor into its AV stack to study the impact of adaptive lidar on the performance and safety of automated functionality.

The team used a rain machine to simulate wet weather, and mounted the sensor behind a piece of windshield glass to gauge long-range sensor performance in heavy rain, confirming that a 1,000-meter detection range was still achievable.

"Having already verified AEye's extreme long-range detection, this was an important follow-up test to ensure that 1,000-meter performance would stand up in less than ideal weather conditions, and when mounted behind the glass of a windshield," said Phil Magney of VSI Labs.

A second test involved using the AEye sensor to detect objects in a dark tunnel amid simulated heavy rain. In this case the AEye sensor detected five bricks and a black dog not visible to the human eye at 120 meters, as well as a pedestrian and child at 110 meters, according to the company.

Testing of lidar platforms behind surfaces such as car windshields or grills is critical to automotive OEMs, since minimal impact on lidar performance will provide flexibility in implementing sensors within vehicle designs, without compromising aesthetics or changing the aerodynamics.

The AEye platform utilizes 1550-nanometer laser illumination, a longer wavelength than some lidar platforms and intended to better penetrate obscurants for superior detection in rain, snow, and smoke.

Trade-offs between wavelength, range, and user safety are inherent in the adoption of lidar for anonymous vehicles. Early platforms adopted 905 nanometers for reasons of cost and availability, although that wavelength brought with it eye-safety considerations that effectively limited the sensing range.

Speaking in June 2020, company founder and then-CEO, now-CTO, Luis Dussan stated that "a non-arrayed micro-MEMS" architecture was also at the core of the AEye system design, "providing the automotive industry the combination of reliability, performance and price they have been seeking."

In February 2021 AEye announced a merger agreement with acquisition specialists CF Finance Acquisition Corp. III (CF III), with a view to the creation of AE Holdings and an associated Nasdaq listing under the stock symbol LIDR. The transaction is intended to deliver up to $455 million of gross proceeds, and was expected to close in the second quarter of 2021.

A subsequent adjustment in the merger value of AEye, from $1.9 billion to $1.2 million, was made in May 2021. Alongside the new lidar range test data, AEye has now said that it "remains on track to complete its previously announced business combination agreement with CF III in the third quarter of 2021."