University of Queensland exploits quantum entanglement for uses in Raman microscopy and beyond. 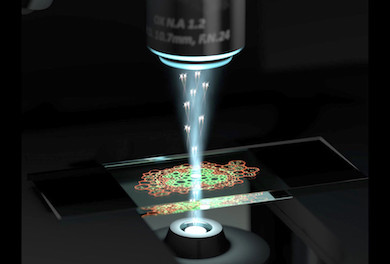 A project at the University of Queensland (UQ) has demonstrated a way to improve the signal-to-noise performance of a Raman microscope using quantum correlations.

As reported in Nature, improving the signal-to-noise ratio of the technique enhances its sensitivity without requiring a potentially damaging increase in light intensity. UQ believes that its approach to photon control could now also be used in a number of applications outside bioimaging.

"The best light microscopes use bright lasers that are billions of times brighter than the sun, and fragile biological systems like a human cell can only survive a short time in them, which is a major roadblock," commented Warwick Bowen from UQ’s Quantum Optics Lab.

"The quantum entanglement in our microscope provides 35 percent improved clarity without destroying the cell, allowing us to see minute biological structures that would otherwise be invisible. The benefits are obvious, from a better understanding of living systems to improved diagnostic technologies."

Quantum entanglement, in which the quantum states of particles remain dependent on each other even though the particles are separated by a physical distance, has for some time been thought to be potentially valuable in optical applications.

Initial studies in 2014 using confocal interference microscopy with an entangled two-photon light source confirmed that differences in the phase shift of the entangled photon beams smaller than those normally allowed by the inherent signal-to-noise ratio of the platform could be successfully detected, effectively enhancing the system's imaging capability.

Applying similar principles to fluorescence microscopy proved challenging until developments in optical fiber bundles and single-photon avalanche detectors allowed higher quantum efficiencies and scalable architectures. Work in 2017 at Israel's Weizmann Institute of Science proved that quantum correlation information could be used to determine the number of active emitters contributing to fluorescence microscopy data and localize them. Using this to determine when only a single emitter is switched on in the detection volume is a route to super-resolution performance.

The UQ project has now applied quantum correlation principles to coherent Raman scattering microscopy, where shot-noise currently presents a roadblock to the technique's sensitivity. A quantum approach potentially enhances the ability to detect the spectral fingerprints of individual molecules and image active biological systems, and reduce the illumination intensities required to do so.

The paradigm-changing potential of entanglement

Trials using the UQ system to image yeast cells showed that image contrast between regions where fats are stored within the cell and the cell walls was enhanced, according to the project.

"Our microscope is a coherent Raman microscope that offers subwavelength resolution and incorporates bright quantum correlated illumination," commented UQ in its published paper.

"The correlations allow imaging of molecular bonds within a cell with a 35 per cent improved signal-to-noise ratio compared with conventional microscopy, corresponding to a 14 per cent improvement in concentration sensitivity. By showing that the photodamage limit can be overcome, our work will enable order-of-magnitude improvements in the signal-to-noise ratio and the imaging speed."

The Queensland team also believes that its platform points towards new uses for quantum entanglement beyond microscopy, assisting the progress of quantum technologies into applications such as computing, communications and sensing by demonstrating its use in the real-world sensing applications where Raman can be employed.

"The last piece in the puzzle was sensing, and we have now closed that gap. This opens the door for some wide-ranging technological revolutions."