NeuroVision Imaging is taking part in a ‘landmark’ US study aiming to correlate plaque build-up with memory loss.

An optical technique for identifying the build-up of proteins in the brain linked to the onset of Alzheimer’s disease is under evaluation in a major clinical study.

According to NeuroVision Imaging, a small California company that has developed a fluorescence-based approach for monitoring the build-up of so-called “amyloid plaques” on the retina, the technology could one day offer an early-stage diagnosis of the debilitating disease.

Better test
Amyloid plaques are the abnormal protein deposits that are found throughout the brains of people suffering from Alzheimer’s.

While positron emission tomography (PET) brain imaging is typically used for plaque identification, it relies on the availability of expensive PET scanners, requires invasive patient preparation, and only picks up plaque accumulation once Alzheimer’s is at a relatively advanced stage.

NeuroVision’s optical system could instead be used to monitor plaque build-up on the retina – the only part of the brain and central nervous system in humans that is readily accessible via the eye – at a much earlier stage.

However, a Chinese team's recent meta-analysis of trials using retinal amyloid plaques as a diagnostic proxy for Alzheimer's concluded that the limited number of studies performed thus far, and the different methods employed, meant that it was not yet possible to determine the effectiveness of the approach.

The optical technique will now be evaluated as part of the wider Anti-Amyloid Treatment in Asymptomatic Alzheimer’s (“A4”) clinical study, which is recruiting 1000 volunteers across 70 study sites in the US, Canada, Australia, Japan, and elsewhere. 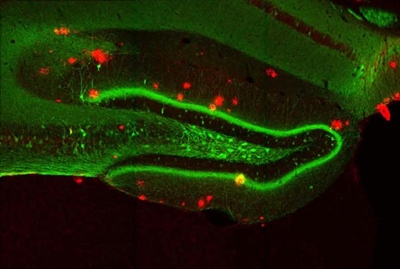 Although the precise function of the amyloid plaques remains unknown, scientists strongly believe that the build-up of these deposits plays a key role in the eventual development of Alzheimer’s-related memory loss.

Robert Rissman, principal investigator for the NeuroVision sub-study and an associate professor of neurosciences at UC San Diego, said: “Evaluating new approaches such as retinal imaging will allow us to understand how Alzheimer’s neuropathology develops in the eye, and how this parallels what is occurring in the brain itself.”

The NeuroVision imager will be used to characterize retinal amyloid imaging findings in subjects with pre-clinical Alzheimer’s, prior to them receiving the antibody treatment.

However, hopes for an effective Alzheimer’s treatment took a blow In late 2016, when Eli Lilly announced that its “solanezumab” antibody treatment had not shown a statistically significant slowing of cognitive decline in people with mild Alzheimer’s-related dementia, in a separate trial on 2100 patients known as “Expedition3”.

The three-year “A4” study is instead focused on people aged 65-85 who have no outward signs of dementia but who do have a high level of amyloid plaque build-up, as determined using PET scans.

The NeuroVision sub-study will also assess whether changes in retinal amyloid imaging correlates with amyloid build-up in the rest of the brain and cognitive change. One hundred subjects will be recruited into the sub-study and imaged annually over three years.

NeuroVision’s CEO Steve Verdooner added: “This is an exciting opportunity to evaluate our technology in a setting in which it could potentially add significant clinical value.”

He says that current methods for evaluating amyloid plaques are both difficult and have limited scope for scaling up to meet any potential demand for any new drugs that are proved to be effective.

“Our technology is designed to be easy-to-use, reliable and, being non-invasive, have minimal impact on patients,” Verdooner said. “If it works in the way we expect, retinal imaging would streamline enrolment into clinical studies and could help identify candidates for new drugs and monitor their efficacy in a practical and accessible setting.”

“Dr. Rissman and I recently identified a strong neuropathological signal using NeuroVision’s retinal imaging system in adults with Down Syndrome, a group of individuals who are at increased risk for developing Alzheimer’s disease,” he pointed out.

NeuroVision’s technology uses curcumin fluorescence to produce micron-resolution images of the retinal plaque deposits. Curcumin, a component of turmeric that lends the spice its distinctive yellow color, binds to beta-amyloid proteins that build up on the retina and fluoresces under blue-light excitation.

Verdooner co-founded NeuroVision with the neurosurgeon Keith Black, who is also a professor in the Department of Neurosurgery at Cedars-Sinai Medical Center in Los Angeles.

Back in 2014, Black and colleagues said that a 200-volunteer study of the technique taking place in Australia had shown “significant promise” for early Alzheimer’s detection.

At the time, the study’s manager Shaun Frost said that the optical imaging technique “appears to detect changes that occur 15-20 years before clinical diagnosis”.

Last year, NeuroVision completed a $10 million round of series B funding, with venture investor Wildcat Capital Management providing half of that total, in support of the company’s efforts to validate the technology and gain regulatory approval.

It is also collaborating closely with Janssen Research & Development, part of the pharmaceuticals giant Johnson & Johnson, via a non-exclusive license arrangement. Janssen has developed a drug that it hopes will slow cognitive decline in Alzheimer’s sufferers, and is due to test its effectiveness in another clinical study of amyloid-positive but asymptomatic volunteers.

“The collaboration is intended to help NeuroVision further develop the foundation for wide, global adoption of its technology, including participation in Janssen clinical trials,” announced the Sacramento-based company in February 2016.