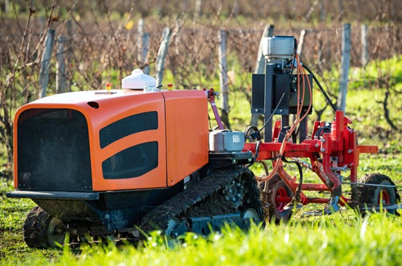 WeLASER objective: an autonomous system to kill weeds with lasers.

Instead of using chemical products, in the future, weeds will be lethally damaged by laser radiation. Partners in the EU project WeLASER are working to create the basis for this vision.

The project brings together research institutions, companies, and non-governmental organizations from the agricultural sector in eight EU countries, including Laser Zentrum Hannover (LZH). Over the next three years, the partners plan to test a laser system's effectiveness at weeding selected crops.

Against the backdrop of a growing world population and the need to reduce the use of pesticides and fertilizers, WeLASER is aiming for more sustainable weed management. Conventional mechanical methods can degrade soil properties and harm beneficial soil organisms. Furthermore, says LZH, the chemical approach “achieves unsatisfactory results in-row weed control”. 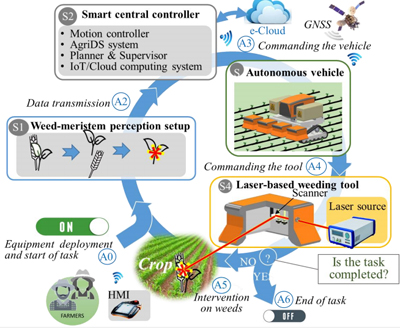 How it works: the technical process of the WeLASER project.

Laser, AI, and IOT vs. weeds

The WeLASER solution is focused on non-chemical weed control. The idea behind it is to damage the weed's growth center with high energy bursts from a high-power laser beam source.

The LZH scientists are developing an image processing system that uses AI to distinguish crops from weeds. They are also teaching the system to recognize the position of a weed’s meristem (the plant’s growth center). The target coordinates are used at the LZH to control a robust, multi-row scanner system so that the laser beam is directed to destroy the weed.

For use in the field, the systems will be installed on an autonomous vehicle. They will then be coordinated via a smart controller that uses the Internet of Things (IOT) and cloud computing techniques to manage and deploy agricultural data.

The LZH also develops concepts for ensuring laser safety for everyone involved, such as farmers and machine operators. The partners want to test the prototype on sugar beet, corn, and winter cereal crops. The prototype should be available by 2023, and then be further developed for commercialization.

The WeLASER ’s technology is intended to offer a clean solution to the weed problem and significantly reduces the chemical load on the environment. This is a European innovation project funded under the Horizon 2020 program.