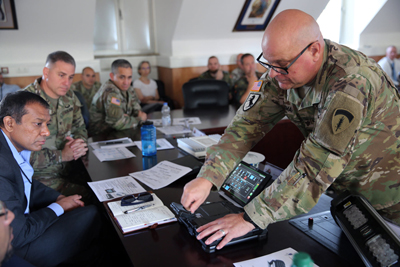 pureLiFi, the Edinburgh, Scotland-based developer of optical LiFI systems, has secured another multi-million-dollar deal to supply the US Army with thousands of additional units of its LiFi Defence system known as Kitefin.

“The Kitefin system is disrupting the ecosystem of wireless defence technologies,” commented Alistair Banham, CEO of pureLiFi. “Kitefin provides the latest advancement s protecting mission critical communications and has the potential to save missions and lives.”

Technologies such as WiFi, 4G and 5G use radio frequencies to transmit data, which are typically easy to detect and intercept, as well as causing overcrowding resulting in slow speeds and unreliable communications due to increased RF congestion. LiFi, based on light, is more reliable, secure, and simpler to deploy.

The US Army Europe is expanding their use of technologies such as LiFi because not only has it enhanced the Army’s wireless connectivity toolset, but has demonstrated in action, that LiFi solves real problems faced by defense and national security operators.

CW5 Andrew Foreman, US Army Europe & Africa CTO, commented, “LiFi technologies answer the serious issues associated with the RF portion of the spectrum. Due to their low probability of detection, jamming, and intrusion, FSO and LiFi offer an extremely survivable form of communications when in direct conflict with a near-peer adversary.”

pureLiFi has been named one of the EE Times Silicon 100 start-ups to watch two years running. Having now secured multiple million-dollar deals with the US Army Europe, pureLiFi have officially made their mark on the wireless communications marketplace.

With growing demand for bandwidth hungry technologies, such as augmented and virtual reality, next generation manufacturing and the metaverse, new wireless communications technologies are needed to enable new use cases and technology breakthroughs.

pureLiFi is now offering high-speed components ready for integration into consumer electronics such as mobile phones, laptops and tablets, with a view of taking LiFi mainstream and offering unprecedented bandwidth, ultra-fast speeds and military grade security to the consumer.