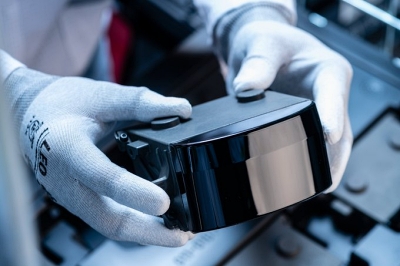 Valeo, one of the world’s largest providers of car parts and a leading supplier of sensors for advanced driver assistance systems (ADAS), is set to release new scanning lidar technology with claims of much-improved range and resolution.

The Paris-listed company, which manufactures its lidar systems in southern Germany, says that the “third-generation” design will be launched to the market in 2024.

The system is said to be capable of reconstructing a 3D real-time image of the vehicle's surroundings at a rate of 4.5 million pixels and 25 frames per second.

“Compared with the previous generation, the resolution has been increased 12-fold, the range 3-fold, and the viewing angle 2.5-fold,” Valeo added.

According to market analyst company Yole Developpement, Valeo - which provides earlier versions of its lidar equipment to key customer Audi and has another exclusive deal with Mercedes - ranks in the top ten lidar companies worldwide, with 2020 sales estimated at $49 million.

Emergency situations
Geoffrey Bouquot, Valeo's senior VP for research and development and strategy, said in a company release: “Valeo's third-generation lidar is a major technological advance toward the autonomous vehicle.

“This upgrade strengthens Valeo's technological and industrial leadership in the field, when it was already the only supplier on the market currently series-producing an automotive-grade lidar scanner. Our number one goal with this device remains the same - to save lives on the road.”

Although it does not specify a particular range for the new technology, Valeo says it will operate at highway speeds of up to 130 km/h.

“Even in such situations, a vehicle fitted with the third-generation scanning lidar can manage emergency situations autonomously,” states the firm.

Valeo also claims to be the first, and to date only, company to produce a scanning lidar on an industrial scale. It says it has already made more than 150,000 units, accounting for virtually every car on the road that is currently equipped with this kind of lidar scanner.

The company now employs 300 engineers at its lidar manufacturing facility in Wemding, drawing on expertise in optics, mechanics, and photonics to file more than 500 lidar-related patents.

As the technology becomes more widely available and affordable, Valeo forecasts that as many as 30 per cent of premium new vehicles will feature “level 3” automation by 2030, with lidar technology regarded as an essential requirement.

Beyond cars, it sees opportunities in autonomous shuttles and robotaxis, automated delivery vehicles, and autonomous trucks, with the agriculture and mining sectors also expected to adopt lidar technology.

While Yole currently projects a $5.7 billion market for lidar by 2026, Valeo is expecting the overall sector to be worth more than $50 billion by 2030.