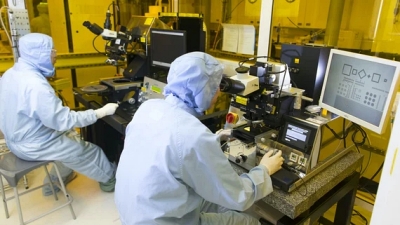 IQE, the UK-headquartered epiwafer foundry, says that currency effects and softening demand in photonics and other markets will see its full-year sales fall to around £152 million for 2021.

That would represent a drop of around 8 per cent from last year’s total of £178 million, with earnings before interest, tax, depreciation and amortization (EBITDA) also taking a hit.

Aside from the stronger value of the pound against the US dollar, part of the reason for the drop is that sales of photonics products for defense and security applications will be lower than previously expected in the final quarter of the year.

Demand for vertical cavity surface-emitting lasers (VCSELs) is also tailing off in line with typical smartphone manufacturing seasonality, although IQE pointed to a “general softening” in smartphone supply chains and slower-than-expected sales of new distributed feedback (DFB) lasers as other reasons for the decline.

IQE had previously said that 2021 sales would be similar to 2020's, on a constant-currency basis, and the latest update sent IQE’s London-listed stock price down in value by around 20 per cent.

GlobalFoundries connection
Commenting on the wider market situation, IQE’s executive chairman Phil Smith stated in the firm’s trading update: “Whilst it is disappointing that 5G infrastructure deployments have remained weak all year, we still expect this macro trend to provide a multi-year growth cycle for IQE.

“In the immediate term, broader semiconductor market shortages have softened demand in some supply chains but we believe these effects to be temporary and remain excited by the opportunities ahead.”

Meanwhile, the company has now appointed a permanent successor to outgoing CEO and founder Drew Nelson.

Americo Lemos, currently a senior executive at silicon chip giant GlobalFoundries (GF) with responsibility for business in the Asia-Pacific region, is set to start work as IQE’s CEO in early January.

“The depth and breadth of Americo’s industry expertise make him the natural choice to take the business forward in its next stage of growth,” commented Smith.

“His appointment will enable us to build on our solid global industry foundations and market-leading positions, and take advantage of key structural drivers and opportunities arising with the proliferation of 5G and the Internet of Things.”

The appointment of Lemos was announced shortly after IQE revealed details of a strategic partnership with New York-based GF that will be largely focused on the development of gallium nitride on silicon (GaN-on-Si) devices for wireless infrastructure applications.

GaN semiconductors are used in high-power, high-frequency devices, with IQE saying that the global roll-out of 5G networks has relied heavily on the technology.