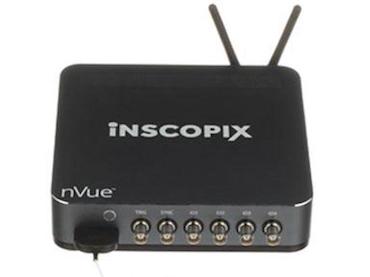 The dual-color miniscope, one of a number of technologies discussed by the company at the Neuroscience 2021 conference, allows researchers to study the interaction between two distinct brain signals.

Named the nVue system and launched earlier in 2021, its ability to simultaneously image calcium ion activity in two distinct populations of cells in rodent subjects could enable multiple new applications, according to Inscopix.

Also at Neuroscience 2021, the annual conference of the Society for Neuroscience (SfN), Inscopix described how the dual-color abilities of the nVue platform could produce simultaneous imaging of the neural activity and blood flow in animals during free behavior.

This could enable investigation of neurovascular coupling, the process of localized change in blood flow following neuronal activity which can be disrupted by conditions such as stroke, tumor or Alzheimer's disease.

"This new application of the nVue miniscope system opens up new ways to study functional circuit data with vascular dynamics in cortical and deep brain regions in awake animal paradigms," noted the company in its presentation.

"The ability to understand neurovascular coupling by imaging blood flow dynamics together with calcium activity, and the ability to study neurotransmitter release in conjunction with neuronal calcium activity, are applications relevant to researchers across the basic and translational neuroscience spectrum," commented company founder and CEO Kunal Ghosh.

In a presentation to the SfN conference about its nVue platform, Inscopix indicated that integration of two separate LEDs into the miniscope allowed imaging of green and red indicators without crosstalk, and novel gradient-index (GRIN) lens minimized axial chromatic aberrations and corrected for chromatic shifts. An analysis algorithm then enables detection of colocalized red and green cells in the neurons under examination.

"We are excited to build on the commercial release of nVue, and at this SfN we are releasing and showcasing new imaging applications enabled by nVue that take us beyond imaging of calcium activity," commented Ghosh.

A further Inscopix presentation at the event dealt with developments in the general use of head-mounted microscopes for imaging of genetically encoded neurotransmitters, across the nVue platform and Inscopix's earlier nVista device.

Speaking at SPIE Photonics West in 2016, Ghosh commented that nVista was an example of the importance of industrial photonics developers becoming involved in cutting edge neuroscience research programs such as the BRAIN Initiative.

At the SfN conference, Inscopix commented that current results from the two platforms "demonstrate that miniscopes are an excellent tool for imaging genetically encoded neurotransmitter sensors, and pave the way forward for taking full advantage of such imaging platforms."