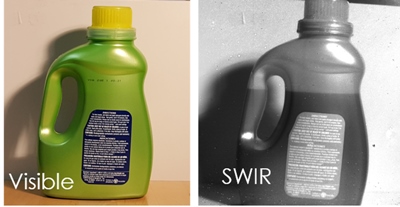 A new spin-out company from the Research Triangle Institute (RTI International) in North Carolina is set to commercialize a range of low-cost, high-resolution short-wave infrared cameras based around a sensor featuring an active layer of colloidal quantum dots (CQDs).

SWIR Vision Systems says it will aim the technology at applications in industrial machine vision, automotive, agriculture, and security markets, among others.

PbS dots key
The key to the approach is the use of lead sulfide CQDs - which can be fabricated directly on top of a commercial CMOS read-out circuit (ROIC) – in place of epitaxial indium gallium arsenide (InGaAs) layers grown on indium phosphide (InP) substrates that must then be matched carefully to silicon wafers.

The resulting “Acuros” cameras from SWIR Vision, set to be available in three different resolution formats, will operate across the visible and near-infrared wavelength range, up to 1700 nm.

“Our business model includes in-house manufacturing of our core sensor technology,” added Wildeman, who has previously held senior roles at the likes of Corning, Leica Microsystems, and Duke University.

“We intend to utilize low-cost manufacturing partners for some of the camera components. Commercially, we plan to sell both directly and indirectly into targeted segments, leveraging value-added partners, integrators and distributors to access selected markets.”

Currently SWIR Vision has fewer than ten employees, but Wildeman expects that number to grow this year as the Acuros is commercialized, and when production ramps next year.

Initial financial backing for the firm comes from parent RTI International, with operations for CQD sensor production and final camera assembly already established within a Research Triangle Park semiconductor processing facility. This US Securities & Exchange Commission (SEC) filing by the company suggests an initial $1 million round of seed funding from a combination of equity and debt. 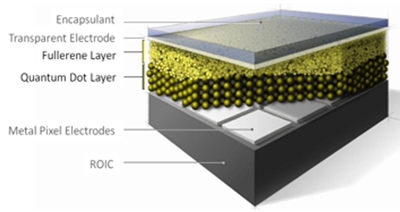 The cost of that complexity also imposes practical limitations on array and pixel size - effectively limiting InGaAs devices to VGA-level resolution. In contrast the monolithic approach by SWIR Vision Systems requires no epitaxial growth or expensive InP substrates, and eliminates the need for the hybridization steps.

One inevitable trade-off comes in the form of a lower sensitivity for photon-starved applications - an Acuros data sheet claims 15 per cent quantum efficiency, compared with a maximum of around 80 per cent for InGaAs-based cameras.

But Wildeman says that the CQD-based sensor will still offer high performance in daylight, or in applications featuring active illumination. “Also, in our research and development roadmap, we expect further quantum efficiency improvements to come,” he added.

The CEO expects the novel technology to both disrupt and expand the market for SWIR cameras by offering a lower cost point for high-resolution imaging, while Acuros’ classification as a non-ITAR “EAR99” product will also permit global adoption.

“We expect to displace InGaAs technology first in applications where higher resolution is valued, and where cost-sensitivity is important,” Wildeman told optics.org.

“We are seeing many potential uses for the technology. To start we are engaging commercial customers with hot glass, liquid fill level, food sorting, and semiconductor inspection applications, to name a few.”