Claimed to be the world's first industrialized optical communications terminal for airborne applications. 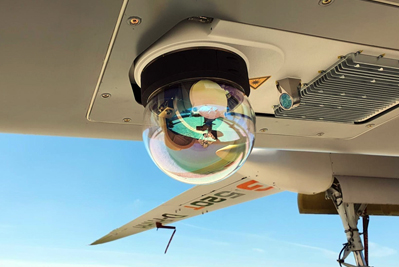 Mynaric's Hawk optical communications terminal is integrated in the fuselage.

Initial flights of the campaign demonstrated key performance criteria of Mynaric's Hawk product currently in pre-series production onboard one of H3 HATS’ aircraft. While previous tests of this nature have used one-off prototypes or technology demonstrators, the latest announcement marks what the pair call “the world's first demonstration of an industrialized optical communications terminal for airborne applications.”

Initial flights of the campaign utilized a setup of two of Mynaric's Hawk products for airborne laser communication on the ground and mounted in the fuselage payload bay of a G520NG aircraft, respectively, to demonstrate air-to-ground links.

The setup was recently cleared for flight by all relevant regulatory aviation authorities. The first flights of the campaign demonstrated stable bidirectional laser links with 10 Gbps speed between the aircraft and the terminal on the ground during various flight patterns.

“Closing laser communication links in the air is in many dimensions a lot harder than in space given the aircrafts' movements and atmospheric conditions,”said Bulent Altan, CEO of Mynaric.

“Our customers today are stuck with sub-par data rates in the low Mbps range for air-to-ground use cases and are limited to no real available solutions for air-to-air connectivity,” said Tina Ghataore, Chief Commercial Officer of Mynaric. 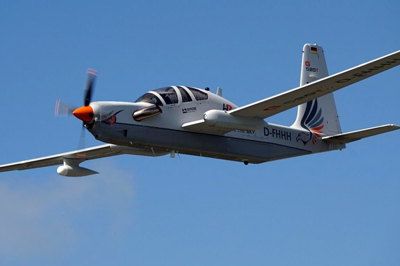 “The Hawk range hits the sweet spot for transfering large quantities of data at gigabit rates quickly and securely. From remotely piloted aircraft systems, to transport and commercial aircraft, we see our products becoming integral to future airborne and mobility networks.”

The flight campaign utilizes a G520NG aircraft suited for manned or unmanned missions at high altitudes of up to 15,200m (50,000 ft) and for long endurances. The addition of the Hawk optical communications terminal to the aircraft extends its capabilities with secure and undetectable high-speed communication.

“This is particularly relevant for intelligence, surveillance, and reconnaissance, broadband provisioning and other missions from high altitudes. HAWK has been designed for secure real-time broadband communication within a wide array of airborne applications. The product is currently in pre-series production at Mynaric's new production facility that was inaugurated in June 2021.

Robert Schmoldt, COO of H3 HATS, said, “The used aircraft G520NG was fully operated from the ground station and showed the UAV capability which is required for our flying telecommunication tower concept.”