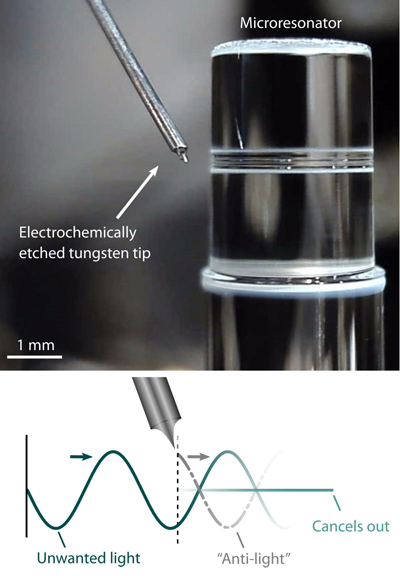 An optical microresonator with a sharp tungsten tip. Click for more info.

Microresonators are small glass structures in which light can circulate and build up in intensity. Due to material imperfections, some light is usually reflected backwards during operation, which disturbs the microresonator function.

A UK-German research partnership has now demonstrated a method to suppress these unwanted back reflections. The scientists say that their findings can help improve many microresonator-based applications – from measurement technology such as sensors used in drones, to optical information processing in fiber networks and optical computing.

The results of the team spanning the Max Planck Institute for the Science of Light (Germany), Imperial College London, and the National Physical Laboratory (UK) have been published in the Nature group journal Light: Science and Applications.

To reduce the unwanted backscattering, the British and German scientists were inspired by noise-cancelling headphones, but their approach uses optical rather than acoustic interference.

“In such headphones, out-of-phase sound is played to cancel out undesirable background noise,” said lead author Andreas Svela from the Quantum Measurement Lab at Imperial College London. “In our case, we are introducing out-of-phase light to cancel out the back reflected light.”

To generate the out-of-phase light, the researchers position a sharp metal tip close to the microresonator surface. As with the intrinsic imperfections, the tip also causes light to scatter backwards, but there is an important difference: the phase of the reflected light can be selected by controlling the position of the tip.

“It is an unintuitive result: by introducing an additional scatterer, we can reduce the total backscattering,” said co-author and principal investigator Pascal Del’Haye at Max Planck Institute for the Science of Light.

The Nature paper reports a record suppression of more than 30 decibels compared to the intrinsic back reflections. In other words, the unwanted light is less than a thousandth of what it was prior to applying the method.

“These findings are exciting as the technique can be applied to a wide range of existing and future microresonator technologies,” comments principal investigator Michael Vanner from the Quantum Measurement Lab at Imperial College London.

The team says that the method could be used to improve gyroscopes; or to improve portable optical spectroscopy systems, promising developments such as built-in sensors in smart phones for detection of dangerous gasses or helping check the quality of groceries.

Watch Andreas Svela explain the backscatter-reducing research at the Faculty of Natural Sciences Research Showcase in the following video: