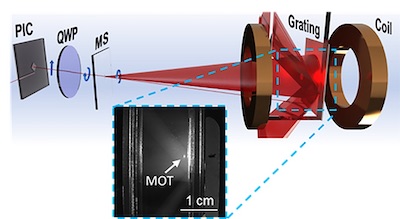 Caught in a trap: laser cooling

Laser cooling, in which carefully arranged laser beams can reduce the momentum of an atom to the point where the it can be individually caught by a magnetic field, is an important technology for future quantum networking and other applications.

The optical platforms to produce and trap these cold atoms have to date tended to be large and complex, limiting the practical uses to which the principle has been put.

A project at the National Institute of Standards and Technology (NIST) has now developed a more straightforward approach, potentially opening the way to chip-scale manufacturable devices utilizing cold atoms.

As described in New Journal of Physics (NJP), the project has designed a compact optical platform about 15 centimeters long, that cools and traps gaseous atoms in a 1-centimeter-wide region.

Although this is still about 10 times too big to fit on a microchip, it is a key step toward employing ultracold atoms in a host of compact, chip-based navigation and quantum devices outside of research settings, according to the project.

In particular the NIST architecture relies solely on flat planar optics to achieve the laser cooling effect, said to be the first such system to employ simple and mass-producable optical components.

"This is important as it demonstrates a pathway for making real devices, and not just small versions of lab experiments," said William McGehee of NIST.

The platform's basic principle is to couple free-space light into a photonic integrated circuit (PIC), and then efficiently convert the sub-micron waveguide mode within the PIC back into a free-space mode of centimeter-scale.

"Beam expansion is necessary as magneto-optical trapping is inefficient with millimeter-scale or smaller laser beams, due to the finite optical scattering forces present in laser cooling," noted the team in its paper.

The essential beam manipulation is carried out using a combination of an extreme mode-convertor (EMC) on the photonic integrated circuit, and a dielectric metasurface studded with pillars roughly 600 x 100 nanometers in size, acting as an aspheric beam shaper.

"The nanopillars act to further widen the laser beam by another factor of 100," commented NIST. "The dramatic widening is necessary for the beam to efficiently interact with and cool a large collection of atoms. Moreover, by accomplishing that feat within a small region of space, the metasurface miniaturizes the cooling process."

The expanded and reshaped free-space beam then hits a segmented reflective grating chip, which diffracts the light into three additional pairs of equal and oppositely directed beams, to create a four-beam magneto-optical trap within a vacuum chamber.

When combined with an applied magnetic field, the four beams push on target atoms in opposing directions, serving to cool and trap those atoms. In trials, the platform was used to successfully trap atoms of rubidium using light at 780 nanometers, the wavelength of the element's cooling transitions.

Although the optical system will now have to be made considerably smaller to carry out the same operation on a chip, the compact size and robustness of planar optics designs should help transfer the principle into use in atomic clocks, interferometry and quantum networking, said the NIST team.

"Ultimately, making the light preparation smaller and less complicated will enable laser-cooling based technologies to exist outside of laboratories," commented William McGehee.