Quantum accelerometers for tiny satellites move to the next stage of development with UK funding. 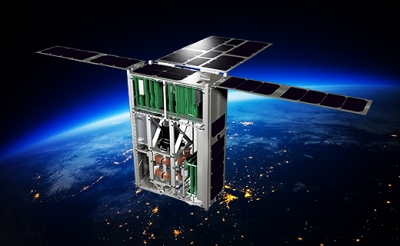 The UK Space Agency is funding a new project to further develop laser-based quantum sensors for use on board satellites.

Announced by the Centre for Earth Observation Instrumentation (CEOI), the Cold Atom Space PAyload (CASPA) Accelerometer effort represents a follow-up to the initial CASPA CubeSat project, which demonstrated how to create and trap a cloud of laser-cooled atoms in a sufficiently compact form factor for a CubeSat.

Leading the follow-up effort will be experts from imaging firm Teledyne e2v’s dedicated space and quantum team, alongside researchers from the University of Birmingham - home to the UK’s quantum sensing “hub” - and Rutherford-Appleton Laboratory.

Tiny forces
Teledyne e2v, which has become closely involved in several quantum technology development projects in the UK, says that the CASPA instrument will be able to measure the tiny forces exerted on a spacecraft in very low Earth orbit, which over a long period of time can cause de-orbiting due to “atmospheric drag”.

The accelerometer will use six lasers, arranged orthogonally, to hold in place very precisely an ‘atom cloud’ just a few millimeters in diameter, at temperatures close to absolute zero.

“It is by measuring the minute accelerations experienced by this ‘atom cloud’ that the extremely small forces on the specially designed spacecraft can be calculated,” explained the firm. “The project will show how this instrument can be built in a low-power and compact package.”

A recent journal paper published by the team working on the original CASPA project described how the consortium built and vibration tested a so-called “6U” (approximate dimensions: 100×200×300 mm) CubeSat that would be suitable for laser cooling of atoms.

Regarded as a precursor to the development of gravity sensors for future Earth observation missions, the project featured an optical subsystem built by UK photonics firm Gooch & Housego, and a frequency doubler developed at the University of Southampton.

Optical crystal specialist Covesion was also involved, alongside XCAM, Clyde Space, and Teledyne e2v. The team reported that the key challenges were to achieve the necessary compactness, thermal control, and low power consumption requirements while also meeting the stringent environmental requirements of launch and the space environment.

“The outcome of the project is a cold atom CubeSat that is constructed from components and subsystems with TRLs ranging from 3 to 9,” wrote the team. “The 6U CubeSat demonstrates that a rugged cold atom system designed for the space environment can be achieved in a compact form factor. This paves the way for more complex systems that will be capable of measuring gravity in space.”

Active region
Teledyne e2v explains that the accelerometer now under development will improve understanding of the Earth’s upper atmosphere, a highly active region that plays a key role in the planet’s energy transfer, thus influencing climate and weather.

“Understanding the dynamics of the Earth’s upper atmosphere will rely on extremely sensitive measurement of the forces acting on a specially designed satellite as it passes through the rarefied atmosphere of Very Low Earth Orbit (VLEO),” added the firm.

“The new accelerometers are based on an area of quantum technology that uses alkali atoms, which are cooled by lasers close to absolute zero, without the use of cryogenics. The sensors will enable a dramatic step forward in our understanding of upper atmospheric dynamics and drive advances in climate modelling, weather forecasting, and satellite orbit prediction.”

Among the specific applications that could result are more accurate measurement of changes to polar ice mass, ocean currents, and sea level. Higher-resolution data may enable the discovery of new underground natural resources that are currently not detectable, while deep-space navigation and high-precision timing sources could also result.