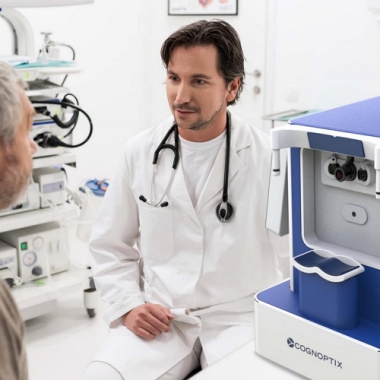 Cognoptix, a Massachusetts company working to develop a laser-based technique for spotting Alzheimer’s disease, has raised new equity funding that will support a submission to the US Food & Drug Administration (FDA).

Combined with a revamped scientific advisory board and new hires in executive management roles, the company - previously known as Neuroptix - is said to have been “revitalized” over the past year thanks to efforts by its latest CEO, Susanne Wilke.

The latest financing was led by Launchpad Venture Group, Harvard Business School Alumni Angels of New York, and the New York Angels (NYA), including the NYA 2020 Sidecar Fund. Both new and returning investors are said to have taken part.

As part of the latest effort, all prior rounds of investment - of which there were several, totalling more than $30 million in aggregate - were converted into either "Series R" or common stock, a move to simplify the company’s capitalization structure, and prepare for future rounds.

Laser fluorescence decay
Appointed in early 2019, Wilke is a seasoned biotechnology executive and investor. As well as refreshing Cognoptix’ management, she is said to have advanced the firm’s “SAPPHIRE II” diagnostic system closer to market.

Combining laser excitation with a fluorescent ointment that acts as a biomarker for the Alzheimer’s-specific β-amyloid protein, the system uses time-correlated fluorescence decay to identify the protein in a patient’s eye, and is said to be capable of early detection of the debilitating disease.

Cognoptix says it intends to use the $2.6 million in proceeds from the latest angel investor round to prepare for pivotal studies and regulatory requirements in support of its FDA submission process for the equipment.

According to a “pre-pivotal study” poster presentation on the company’s web site, SAPPHIRE II has demonstrated an ability to distinguish between normal subjects and those with probable Alzheimer’s.

Initial results from the 2019 poster presentation even suggest a better sensitivity and specificity for detecting β-amyloid than with positron emission tomography (PET) scans - currently regarded as the “gold standard” diagnostic method.

In tests on 43 subjects in Florida, mostly with Alzheimer's or some cognitive impairment, no adverse effects were reported, with the Cognoptix team saying that the approach may be able to identify the disease at its pre-symptomatic stage.

$400 scans possible
The company’s latest investor presentation states that a pivotal trial is set to begin next year, with FDA approval anticipated in 2023.

It also points out the vast potential market for such a system. An estimated 50 million people currently living with dementia globally, says Cognoptix, adding that this number will rise to 75 million a decade from now. Around seven in ten dementia patients are believed to suffer from Alzheimer’s specifically.

However, only 3 per cent of those patients are currently believed to receive any kind of diagnostic test - partly because of the hugely expensive nature of PET equipment that is also under high demand for diagnosing other diseases, notably cancer.

Characterizing Alzheimer’s as having a “long, silent pre-symptomatic phase”, Cognoptix points out that the disease actually begins in mid-life, but that no early test is currently able to differentiate those at risk from progressing to full-blown Alzheimer’s.

Most diagnosis happens at a late stage, by which point therapeutic options are extremely limited, while misdiagnosis remains both common and costly, states the firm.

Critically, the deposits in the lens of the eye can be detected decades before any lesions become apparent in the brain. In addition, β-amyloid protein shows no degradation from the lens tissue with time.

If things go according to plan, Cognoptix believes that the laser fluorescence decay system could be sold at a price of $75,000, with the cost of each test potentially just $400. That would compare with at least $5000 for a single PET scan.