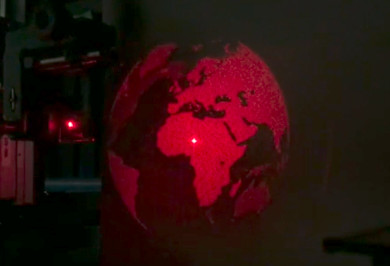 Another science-fiction staple may be moving closer to science-fact, thanks to research at the Tokyo University of Agriculture and Technology (TUAT) into holographic movies.

Static holograms are now familiar concepts, but arranging for a sequence of holographic images to be assembled into a convincing moving image has proven challenging.

The TUAT project tackled the problem through the use of a metasurface, involving nano-scale repeating patterns at scales smaller than the wavelength of light, according to the findings published in Optics Express.

Previous approaches to projecting holographic images in a manner which creates a holographic movie have included technologies such as spatial light modulators, acousto-optic modulators, digital mirror devices and photoreactive materials. But none have produced a satisfactory balance between the pixel period, the image intensity, and the achievable frame rate.

Reconfigurable metasurfaces are thought to offer a solution, and earlier research into their use has examined ways to influence optical parameters such as polarization switching, or provide stretchable optical substrates. The former could in theory allow two holographic image frames to be switched rapidly, while the latter allows different hologram frames to be fabricated on the same substrate under different strains.

But none of these methods has successfully achieved metasurface hologram movies of more than 4 frames per second, according to the TUAT project.

TUAT adopted an alternative approach, one borrowed from basic cinematography in which a movie is recorded as a sequence of frames and then projected via a light source, playing back the image frames sequentially.

"Although this approach has also been studied using holographic film, image quality has been limited because subwavelength pixel pitch cannot be achieved due to optical exposure," commented Kentaro Iwami of TUAT MEMS/NEMS Plasmonics Lab in the published paper. "Therefore we have adopted a cinematographic approach based on metasurface holography."

Color fidelity of a 3D projection

TUAT took a public domain animation of the Earth and broke it down into 48 frames. Each frame was then fabricated onto a metasurface built up of rectangular "metallic aperture meta-atoms" of gold, each measuring 200 x 100 x 120 nanometers. Each metasurface frame is capable of diffracting laser light shone through it so as to reproduce a holographic 3D image of that frame.

The metasurface frames were fabricated onto a looped substrate, so that moving the loop through the laser illumination - analogous to a film moving in front of a light source - recreated the hologram of the Earth.

Each frame on the substrate measured 0.6 x 0.6 square millimeters, and the beam diameter of the He-Ne laser used to project through the frames was 0.6 millimeters. So when a mechanical stage was used to move the looped strip at 30 millimeters per second, the holographic movie appeared at 30 frames per second.

Unlike in basic cinematography, where illumination needs to be synchronized with the film frames and the gap between them, the "intermediate" image created when the laser shines on the border between two holographic frames is simply the two frames superimposed, both observed at the same time, which allows a continuous-wave laser source to be used.

Future work will involve speeding up the manufacture of the holographic loop, since it took an electron-beam lithography printer six and a half hours to draw the 48 frames onto a 2-centimeter-square chip, according to TUAT, and a six-minute holographic movie would take just over 800 hours to draw using the same platform. The color fidelity of the image will also be investigated.

"We are using a helium-neon laser as the light source, which produces a reddish holographic image," said Kentaro Iwami. "The aim is to develop this to produce full colour eventually, and we want it to be viewable from any angle - a whole-hemisphere 3D projection."