LZH project aims to develop platform for imaging and removal of cement during arthroplasty. 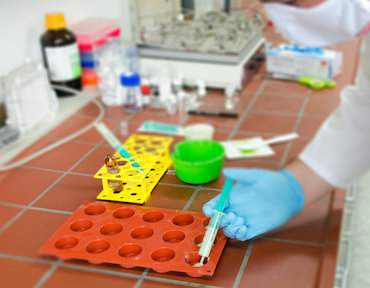 Down to the bone: PMMA cement

Hip prostheses can last ten to 15 years without the patient experiencing any problems, but sometimes an existing replacement hip joint must be removed to allow the fitting of a new one.

In such cases the old bone cement holding the existing prosthesis in the femur must be removed, a procedure which can be complicated and physically demanding. Although ultrasound has been investigated as a means to assist removal of existing cement, surgeons usually have to employ mechanical means to remove it.

A project underway at Laser Zentrum Hanover (LZH) is developing a laser-based system with which doctors should be able to remove the old cement more gently, and have a clearer view of the surgical site while they do so.

The LaZE project aims to design an endoscopic system for chromatically contrasted imaging and laser-based removal of bone cement in replacement surgery, or revision endoprosthetics.

It is funded by the Else Kröner-Fresenius-Stiftung (EKFS) medical research institute, with Helios ENDO-Klinik Hamburg working with LZH on clinical translation.

"LZH want to develop a rigid endoscope through which a laser beam and a camera are guided," commented LZH describing the project.

"The surgeon shall segment the old cement with the laser to facilitate the removal, and a video image from the camera allows the surgeon a direct view of the process inside the bone, with an integrated selective illumination to enhance the contrast between cement and bone. This would make it easier for the surgeon to navigate wthin the bone and differentiate between bone and bone cement."

The Biophotonics Group of LZH will be responsible for developing the spectroscopic analysis technique, the laser ablation process itself, and a clinical demonstrator.

Bone cements used in hip replacements, as well as in procedures on knee, shoulder and elbow joints, are acrylic resins based on polymethyl methacrylate (PMMA), which has been used for this application with only minor modifications since the 1940s.

This means that the laser employed for removal of the cement has to be capable of effective ablative action on PMMA materials, which has not proven to be straightforward in clinical systems.

Initial research in previous years focused on the use of carbon dioxide lasers, due to the rapid material removal rates that such sources were thought to be capable of. However, trials revealed that they also caused unacceptable thermal stressing of the bone around the PMMA cement, even if a careful controlled pulsed laser regime was employed.

Excimer lasers were investigated as an alternative, but the PMMA removal rate was then found to be unacceptably low, potentially only one-tenth that of the carbon dioxide sources.

Other variant techniques, including the addition of colored dyes to PMMA in order to selectively enhance the absorption of pulsed laser light to alter the ablation characteristics, have also been researched.

LaZE will now investigate whether recent advances in laser pulse control and power output capability indicate a suitable source for the clinical removal of PMMA bone cement, including a study of the ablation of PMMA using high and low energy pulses. The long-term goal is to reduce the duration of the hip operation, and make the procedure safer and less invasive for those receiving the replacement prosthesis.