German project takes a step towards practical clinical application of the technology. 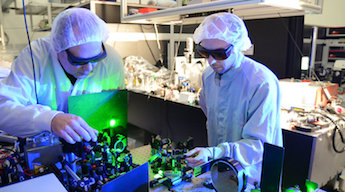 Generating X-rays through the action of a laser on a target gas cell is recognized as a route to producing radiation with a higher brilliance than can be obtained from a simple X-ray tube, but at a much lower cost than using a full-scale synchrotron.

Both methods have their uses in high-energy physics, but have proven to be less convenient for clinical radiology, one of the most important applications for X-rays. In particular, the acquisition time for a tomography operation on a clinical scale using these sources has until now had to be measured in hours.

A new project involving Ludwig Maximilian University of Munich (LMU), the Max Planck Institute of Quantum Optics (MPQ), and the Technical University of Munich (TUM) has now taken a major step towards solving this issue, by developing a new protocol for the use of laser-based sources of X-rays that is much better suited to clinical use. The work was published in Optica and Nuclear Instruments and Methods in Physics Research.

The breakthrough was demonstrated using ATLAS, a high-performance laser in LMU’s Laboratory for Extreme Photonics (LEX Photonics), which in previous research at the Max Planck Institute in 2015 had successfully been used to derive the three-dimensional structure of an insect from two-dimensional projection X-ray images taken from different angles.

Real-world imaging applications
For the latest experiments at LMU, the team adapted the platform to suit 1 Hz repetition rates and developed customized image reconstruction algorithms. This combination meant that the tomographic examination of a specimen required significantly less data overall than was previously necessary, and the project was able to carry out tomographic reconstruction of centimeter-scale human bone samples using a laser-driven betatron source within a few minutes.

"In the near-term, these betatron sources might be further improved by using controlled-injection schemes, and operation at 10 Hz should be possible," commented the team in its published paper. "At higher repetition rates, it will be easier to reach the required X-ray energies for medical tomographies using Thomson backscattering sources."

The potential impact of laser-driven X-ray sources has lead LMU and TUM to establish the Centre for Advanced Laser Applications (CALA), which is intended to provide both a high-energy laser facility via the ATLAS platform, and a second laser plaform christened the Petawatt Field Synthesizer able to provide hundreds of mJ of laser pulse energy at kHz repetition rates.