REDAPT cup designed for use in “revision” cases, in which compromised bone makes implant fixation difficult. 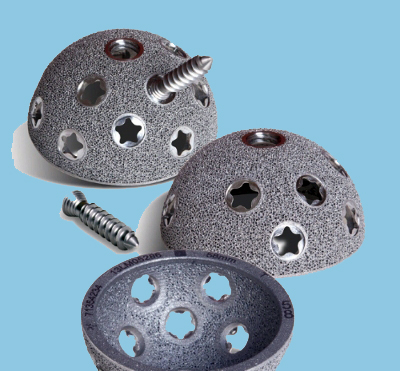 The REDAPT cup is designed for use in so-called “revision” cases, in which compromised bone makes implant fixation and stability more difficult. To allow ingrowth, the additive, or 3D, manufacturing process is used to produce an entirely porous implant that mimics the structure of cancellous bone, which is spongy and less dense, allowing variable-angle locking screws to be used to enhance implant stability and minimize micromotion after surgery.

“We’re excited about the creative possibilities this new manufacturing process holds for surgeons and their patients,” said Mike Donoghue, Vice President of Global Reconstruction at Smith & Nephew. “Bringing to market a 3D-printed titanium acetabular cup for difficult revision procedures is just one example of the potential of this remarkable technology.”

S&N’s CONCELOC Advanced Porous Titanium technology is an alternative to external porous coatings, such as sintered beads or fiber mesh used in other uncemented implants, to allow bone ingrowth while securing the implant in place. Successful fixation of a porous implant requires that the implant remains in steady, stationary contact with the bone as it heals and new bone grows.

For this reason, the new REDAPT cup also uses the associated REDAPT Variable Angle Locking Screws, which work within the implant’s geometry to provide both compression and a rigid construct to the acetabular shell, as well as traditional, non-locking screws.

Smith & Nephew received Food and Drug Administration 510(k) clearance for the REDAPT and associated technologies in November 2015. It is currently available at select sites in the US.