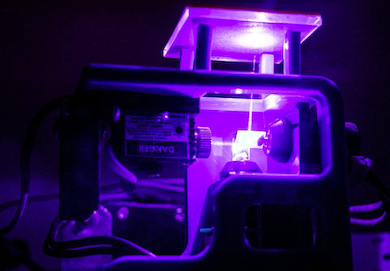 What was down is now up: inverted laer sintering

Advances in laser sintering (LS) operations, where micron-scale powder materials are fused into shaped solid components by the action of a laser, have allowed them to be employed in a range of manufacturing operations.

The procedure is usually limited, however, to the 3D printing of one material at a time, potentially restricting the versatility of the approach in many modern industrial scenarios. Several approaches to multi-material additive manufacturing have been investigated, such as using two separate deposition devices; but none are satisfactory.

A project at Columbia University has demonstrated a potential route to sintering more than one feedstock powder into a finished LS component, via the counter-intuitive approach of directing the laser upwards rather than downwards, an approach christened inverted laser sintering (ILS). The research was published in Additive Manufacturing.

"The limitations of printing in only one material has been haunting the industry and blocking its expansion, preventing it from reaching its full potential," commented Hod Lipson of Columbia University.

The Columbia solution is a LS architecture in which the layer of powder to be sintered sits on top of a thin pane of borosilicate glass. A substrate platform is placed on top of the unsintered powder, and a laser is then directed vertically upwards from underneath the print bed, passing through the glass pane to sinter the powder onto the substrate—effectively an inversion of the usual laser/powder/substrate vertical layout.

After sintering, the substrate with the first sintered layer attached can be lifted out and transferred onto a new glass pane where a different powder feedstock is in place. Repeating the LS operation will then sinter a layer of the new material on top of the existing one, creating a two-material structure.

Structures built up from multiple layers of different materials can be created on substrate platforms in this way, according to the Columbia team.

In trials using a 445-nanometer blue laser source, chosen for its ease of transmission through the glass pane, the team generated a 50-layer thick, 2.18-millimeter sample out of thermoplastic polyurethane powder with an average layer height of 43.6 microns. It then successfully created a multi-material structure from polyurethane and nylon with an average layer height of 71 microns, using the same platform with a second feedstock.

"Reduced material usage is enabled because our design does not have passive, unsintered material surrounding the part at each layer, which is both wasteful and obscures the part during fabrication, making part inspection before the process is completed nearly impossible," noted the project in its published paper.

Future work will address the inherent added complexity of the system over conventional LS, due to the use of multiple glass panes and optical mirror mechanisms necessary for printing in this way. Since prints generated using this design no longer have passive material to act as support, parts created by the printer could also be potentially constricted in terms of geometric complexity.

But the Columbia team believes that ILS could ultimately offer improved routes to additive manufacturing of embedded circuits and electromechanical components. It could also manufacture machine parts with graded alloys, where the material composition changes gradually from end to end, such as a turbine blade with one material used for the core and different material used for the surface coatings.

"We think this will expand laser sintering towards a wider variety of industries by enabling the fabrication of complex multi-material parts without assembly," said Lipson. "In other words, this could be key to moving the additive manufacturing industry from printing only passive uniform parts, towards printing active integrated systems."