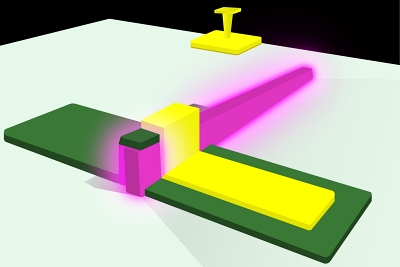 A research collaboration in the US has discovered that their novel LED design overcomes the long-standing problem of efficiency “droop” - the inability of conventional devices to maintain electro-optical power conversion at high drive currents.

Although not intended to solve the “droop” issue, the devices were found to emit orders of magnitude higher optical power than standard designs when the current was turned up. They also produce laser emission in the violet region, suggesting numerous potential applications.

“At first we just wanted to measure how much [current] the new design could take. We started increasing the current and figured we’d drive it until it burned out, but it just kept getting brighter.”

“A typical LED of less than a square micrometer in area shines with about 22 nanowatts of power, but this one can produce up to 20 microwatts,” pointed out Nikoobakht, who regards the development as a significant breakthrough.

“It suggests the design can overcome efficiency droop in LEDs for making brighter light sources.”

Laser transition
As well as producing efficient light emission, the finned devices automatically began to lase at two specific violet wavelengths when turned up to higher driver currents, with an abrupt increase to internal quantum efficiency (IQE) noted as they transitioned to lasing mode.

“This is remarkable, as normally LEDs show a strong decline in their IQE as current density increases,” wrote the team in the journal article.

“Converting an LED into a laser takes a large effort. It usually requires coupling a LED to a resonance cavity that lets the light bounce around to make a laser,” Nikoobakht said. “It appears that the fin design can do the whole job on its own, without needing to add another cavity.” 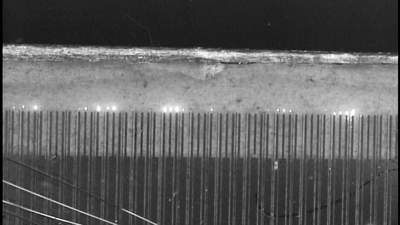 Attempting to explain how the novel devices are able to overcome the droop problem, the team reports models suggesting that spreading of the electron-hole recombination region in their finned LEDs at high currents is able to suppress so-called non-radiative Auger recombination processes.

“Further refinement of this design is expected to enable a new generation of high-brightness LED and laser pixels for macro- and micro-scale applications,” stated the team.

Funded by the US Army, the research effort was originally aimed at creating microscopic light emitters for “lab-on-a-chip” type applications.

As well as NIST, the collaboration involves expertise from the University of Maryland, the Rennselaer Polytechnic Institute, and the IBM TJ Watson Research Center.