Maser is activated by green laser light; the red light is fluorescence from the NV centers; (right) the diamond is held inside a sapphire ring before the laser is used.

Masers – microwave amplification by stimulated emission of radiation – the older, microwave frequency sibling of the laser, were invented in 1954. However unlike lasers, which have become widespread, masers are much less widely used because in order to function conventionally they must be cooled to temperatures close to absolute zero (-273°C).

However, a new study from Imperial College London and UCL, just published in Nature, reports for the first time a maser that can be operated continuously at room temperature.

“This breakthrough paves the way for the widespread adoption of masers and opens the door for a wide array of applications that we are keen to explore. We hope the maser will now enjoy as much success as the laser,” commented Dr Jonathan Breeze, of Imperial's Department of Materials.

In 2012, Imperial scientists demonstrated that a maser could operate at room temperature using the organic molecule pentacene. However, it produced only short bursts of maser radiation that lasted less than one thousandth of a second. In any case, had that design of maser operated continuously, the crystal would likely have melted.

Now, Dr Breeze and colleagues have employed a synthetic diamond grown in a nitrogen-rich atmosphere to create a new type of maser that runs continuously.

He explained, “Carbon atoms were knocked out from the diamond using a high energy electron beam, creating spaces known as vacancies. The diamond was then heated, which allowed nitrogen atoms and carbon vacancies to pair up, forming a type of defect known as a nitrogen-vacancy defect center.” 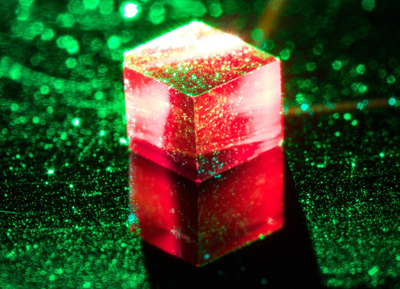 The maser diamond was developed by Element Six.

When placed inside a ring of sapphire to concentrate the microwave energy, and illuminated by green laser light, the maser worked at room temperature and importantly, continuously.

Co-author Professor Neil Alford, also from Imperial’s Department of Materials, commented, “This technology has a way to go, but I can see it being used where sensitive detection of microwaves is essential.”

The team says that such masers could be used in a range of applications such as medical imaging and airport security scanning. They have more traditionally been used in deep space communication and radio astronomy.

As well as medical imaging and airport security scanning, masers could improve sensors for remotely detecting bombs, be a new technology for quantum computers, and enhance space communications.

This work was funded by the UK Engineering and Physical Sciences Research Council and supported by the Henry Royce Institute. The synthetic diamond was created by Element Six.

The Nature video, below, explains how the room temperature video was developed by the Imperial-UCL partnership: