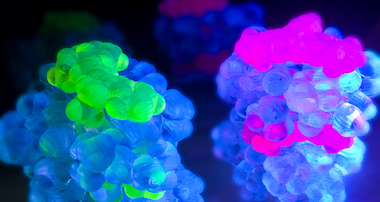 Fluorescent dyes are crucial in OLEDs and other optical materials, but mixing and matching the many different dye species available in order to tailor the final optical properties has proven challenging.

One particular hurdle is electronic coupling between the cationic dye molecules and counter anions, which effectively quenches the fluorescent emission when the molecules are packed together in the solid state. But a project led by Indiana University has now developed a potential solution.

As reported in Chem, the breakthrough involves a class of materials termed small-molecule ionic isolation lattices (SMILES). In particular the new research involved the cationic dye rhodamine 3B perchlorate, co-crystallized into a SMILE with the wide-band-gap macrocyclic anion receptor cyanostar, which is colorless.

During mixing of the components, a hierarchical assembly process occurs in which disc-like complexes of the dye and the anion pack in an alternating charge-by-charge assembly, effectively controlling the distance between the species. These structures allow a high density of dye species to be packed into a volume without the quenching effect occurring.

In trials, the project demonstrated that creating a SMILES structure could restore the emission intensity of the rhodamine dye - reinstating the spectral properties that are seen in a dilute solution, but usually lost when a solid form is manufactured.

Experiments confirmed that a combination of a dense SMILES structure with highly absorbing rhodamines and cyanines could produce a luminous flux exceeding 7,000 M-1 cm-1/nm3, normalized for volume and molar concentration. This represents the highest-known value expressed in this volume-normalized form, according to the team.

A more reliable transfer of optical properties from a dye in dilute solution to the same dye in a high-density solid without quenching or chromaticity shifts suggests that SMILES offer a way to program optical properties into a range of plug-and-play materials, said the project.

"These SMILES pack a lot of dyes inside a material that can absorb a lot of light and then re-radiate it as light without much loss," said Amar Flood of Indiana University.

"By removing the guesswork, these plug-and-play optical materials can now be logically programmed with potential impacts spanning human health and solar energy harvesting."

Commercial applications for SMILES may include medical diagnostics, solar concentrators, and lasers, as well as the incorporation of SMILES into commodity products such as polymers.

To exploit the discovery, a spin-out company called Halophore was founded. In 2019 it was awarded Phase I seed funding by the NSF's Small Business Innovation Research grant program, and opened a lab in Indianapolis to develop aesthetic pigments for paint and polymer tinting applications.

"A range of exciting new uses can be envisioned," Flood said. "We will use SMILES in light upconversion, which is considered for solar harvesting, and in circularly polarized luminescence needed for 3D displays. We also will use the dyes in switchable materials, including photochromic glass that becomes darker when it is exposed to light or ultraviolet radiation."