Sweden's Glo and Germany's Azzurro have technologies that promise to significantly reduce the cost of LED lighting, discovers Andy Extance. 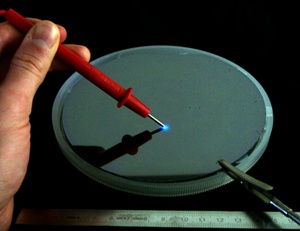 In late 2010, two European companies used the promise of technologies that could reshape the LED industry to secure significant venture capital funding.

And those technologies share one key aspect – the ability to replace the comparatively expensive sapphire wafers, upon which manufacturers currently deposit light-emitting semiconductor material, with large and inexpensive silicon wafers. Otherwise, Germany's Azzurro Semiconductors and Sweden's Glo AB have quite different propositions and are at two very different stages of development. Yet, taken together, they demonstrate that a shift in substrate materials is both poised to gain momentum this year, and could continue to have a disruptive influence for some time.

Ever since their introduction to the market more than a decade ago, blue and white LEDs have mostly been produced by layering gallium nitride (GaN) material onto 2-inch (50 mm) sapphire wafers. Although some progress to larger wafers has been made recently, to a large degree this remains the case today. By comparison, the silicon semiconductor industry now manufactures its devices on 300 mm wafers, providing it with considerable economies of scale.

Resolving this inequality is the business of semiconductor wafer manufacturer Azzurro Semiconductors. Azzurro emerged as a spin-out company from Otto-von-Guericke-University in Magdeburg, Germany based on the exclusive transfer of the technology Aloys Krost and Armin Dadgar developed for layering GaN onto silicon wafers from 1999 through to 2006.

With the success of LED-backlit TVs, chip production volumes have grown rapidly over the past year. But the strong demand also caused 2-inch sapphire substrate prices to double in 2010, meaning that manufacturers' profit margins were squeezed. This makes the massive savings that Azzurro's large silicon substrates provide even more attractive, says Alexander Loesing, co-founder and executive vice president of sales at the company.

“The cost advantage we have calculated in our model is almost 80 percent for a 1mm2 flip-chip LED process, when moving from today’s 2-inch GaN-on-sapphire wafers to our 200 mm GaN-on-silicon wafers processed in a CMOS line,” he told optics.org.

“The key to lower LED costs is that our large area GaN-on-Si wafers can be fed into existing 200 mm CMOS lines, leveraging the extremely low processing costs these high-yield, fully-automated and depreciated fabs offer,” Loesing stressed.

Shining performance
Crucially, Loesing claims that a move to GaN-on-silicon would not compromise performance either: “We believe that you can achieve the same kind of brightness on silicon as you can on sapphire,” he said. The Azzurro executive underlined that electrical performance and lifetimes can also match sapphire-based devices because the layers deposited to produce the light-emitting structure are the same as on sapphire. 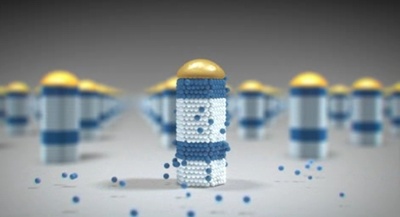 In other areas silicon wafers offer a better option than sapphire. For example, many LED producers grind off the sapphire wafer to deliver chips with better light extraction and thermal management. “The grinding process is costly and difficult with sapphire because it is such a rigid material,” Loesing explained. “On silicon, they routinely grind and polish the 300 mm wafers’ top sides. It's such a quick, high-yield and inexpensive process that it's unimaginable for the process guys currently removing sapphire.”

Consequently Azzurro’s 150 mm wafers have been in great demand and the company is now scaling-up production, adding 200 mm GaN-on-Si wafers to the existing 150 mm product line. The €14.5 million ($20 million) investment it gained in November is being used to fund that expansion, adding more reactors to produce its wafers.

Fariba Danesh, CEO of the early-stage LED producer Glo AB agrees that using silicon substrates is highly attractive. “There’s a school of thought that says the LED market adoption rate will not meet its promise,” she said. “Given the high cost of substrates and the present capital-intensive models, incumbent planar technologies inherently lack the ability to reduce cost.” Glo is seeking to exploit the economies of scale enjoyed by silicon itself rather than supplying materials to help others do so, and to differentiate its offering with nanotechnology.

Totally wired
Founded as a spin-out from Sweden’s Lund University in 2005, Glo is poised to challenge existing LED producers by abandoning typical chip architectures, and replacing them with nanowires. “Nanowires are less costly than the planar material to grow, because the growth rates are much higher,” Danesh told optics.org. “Your capital utilization is better than a typical planar LED company – it’s a cost advantage, on top of the substrate cost advantage.” 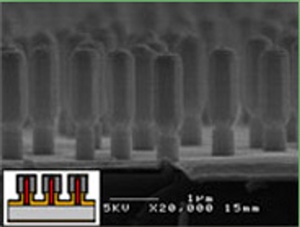 Glo's nanotechnology realizes two advantages in fighting the issue known as “droop” that plagues conventional LED designs. Droop causes devices to lose electro-optic efficiency as the current density flowing through them increases, limiting their brightness at high currents – a key issue that will hold back the nascent solid-state lighting market if unresolved.

One way to tackle the problem is by increasing LED chip size and consequently reducing current density, which Danesh notes is cheaper to do with a silicon substrate. Making devices based on separate columns of semiconductor material also reduces current density. “Nanowires have something like 20 times the surface area, so the current density is theoretically much lower,” Danesh said.

These advantages enabled Glo to attract a 170 million Swedish krona ($26 million) venture capital investment in September 2010. This allowed the company to begin building a pilot line in Silicon Valley, California, although its initial purpose will be to prove that nanowire LEDs really can be competitive:

“Over 2011 we’ll be able to start providing some customers with early samples,” Danesh asserted. “In 2012 we expect to have products.”

But she accepts that until more development work is done the level of benefits of nanowires are not definitively quantified. “Theoretically we have certain advantages but we can’t really claim credit until we’ve put them into practice,” she warned. “The technology is incredibly complex, providing a formidable challenge.”

The LED market is already worth some $10 billion in revenue annually, and is expanding quickly. But despite the differences between Glo, still in its formative stages, and Azzurro, now entering volume production, the reasoning behind the investment in each company seems clear:

If LEDs based on silicon substrates can just prove their worth, the rewards will be significant. As Danesh indicates, even at this early stage her company has just two aims: “We expect to generate revenue – and to grow to be a multibillion dollar company.”

Andy Extance is a freelance science and technology writer based in Exeter, UK.