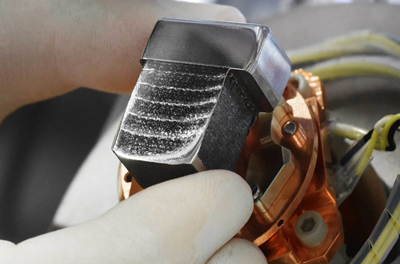 A team from Max-Planck-Institut für Eisenforschung (MPIE – iron research) in Düsseldorf, Germany and the Fraunhofer Institute for Laser Technology, in Aachen, has developed a process that allows the hard-yet-tough "Damascus" type of steel to be produced layer by layer in a laser 3D printer. The hardness of each individual layer can be specifically adjusted. Such composites could be of interest for aerospace components or tools produced with 3D printers.

The material has a legendary reputation, say the modern-day expert smiths: "Damascus steel is hard yet tough because it consists of layers of different iron alloys. In ancient times, this was the material of choice, especially for sword blades." Their work has been reported in Nature.

Born out of necessity and destined to become a legend. In the past, blacksmiths were able to influence the properties of iron alloys only by adjusting their carbon content. They obtained either a soft yet tough or a hard yet brittle steel. Especially for swords, a tough and hard material was needed so that the blades would not break or have to be straightened in the middle of a battle.

Celtic smiths combined various iron alloys (perhaps initially only to recycle the valuable iron) and thus obtained the material that later became known as Damascus steel or damask. It owes its name to the trading centre through which the composite material of oriental origin entered Europe. While Indian and Arabic damask was created by a sophisticated smelting process, European smiths developed the art of folding two alloys into many thin layers. The layered structure of Damascus steel can usually be recognized by a characteristic striped pattern.

Although ferrous alloys exist that are both hard and tough, they are often not specifically made for the 3D printing process thus cannot fully exploit the advantages of this manufacturing technique. The scientists have now developed a steel that consists of only a single starting material but is made up of alternating hard and ductile layers – a form of Damascus steel – through 3D printing.

“We have succeeded in specifically modifying the micro-structure of the individual layers during 3D printing so that the final component has the desired properties – and all this without subsequent heat treatment of the steel,” commented Philipp Kürnsteiner, post-doctoral researcher at MPIE.

The laser beam in a 3D printing set-up not only melts the respective materials but also to heats the top layer of the resolidified metal. This is what the MPIE researchers used to modify the crystal structure of the steel in individual metal layers and thus influence the mechanical properties – without changing its chemical composition. 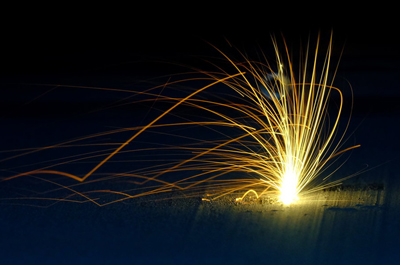 Layers with different properties can be created in a special alloy during 3D printing.

They developed an alloy consisting of iron, nickel, and titanium. At first, this alloy is relatively soft. “Under certain conditions, small nickel–titanium micro-structures form. These, so-called precipitates, harden the material,” said Kürnsteiner. “When subjected to mechanical stress, they hinder the movement of dislocations within the crystal lattice that is characteristic of plastic deformation.”

In order to be able to create the nickel–titanium structures, the researchers interrupt the printing process for a certain time after each newly-deposited layer. The metal cools down to below 195°C. “Below this temperature, a transformation of the crystal structure occurs in the steel”, said Eric Jägle, head of the “Alloys for Additive Manufacturing” group at MPIE. "The martensite phase is formed, and only in this phase can the nickel-titanium microstructures be created."

However, in order to allow precipitates to form, reheating is necessary. To achieve this reheating the researchers exploit the laser energy used to deposit the subsequent layer. This additional effect caused by the laser beam of the 3D printer is referred to as intrinsic heat treatment. Layers that have been directly covered with the next layer without interruption remain softer because they are not yet present as martensite at this point.

For the first time, the researchers have created a composite material consisting of layers with different properties from a single starting material directly during the production process.

Numerous process parameters are suitable for influencing the micro-structures during 3D printing. Jägle said that in addition to or instead of the pause time, which was varied in this study, martensite formation and subsequent precipitation hardening could also be controlled by varying the laser energy, focus, or printing speed. In their experiments, the researchers produced cube-shaped or cuboid steel pieces with side lengths of a few centimeters as models for objects with more complex geometries for which computer-controlled 3D printing is of interest.

They also emphasize that the Damascus-like steel with its periodically changing layers is only one example of locally influencing the micro-structure of an alloy during the manufacturing process. For example, it is equally possible to create tool components with a continuous soft core surrounded by a hard, abrasion-resistant outer layer.

“Thanks to our concept of local control, this was achieved in a single manufacturing step – without the additional process steps previously required for surface hardening such as nitriding,” said Jägle. According to the researchers, it might also be possible to use the technology to locally adjust other properties such as corrosion resistance.