University of Science and Technology of China uses nanocomposites to offer low-cost route to drinking water. 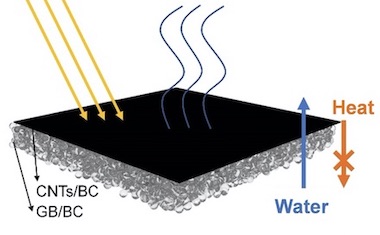 Water purification systems suitable for use in low resource environments are potentially life-saving technologies, and systems powered by solar energy could be particularly vital.

A project at the University of Science and Technology of China (USTC) has developed an efficient and sustainable biomimetic hierarchical solar steam generator (HSSG) based on bacterial cellulose nanocomposites, offering water purification by solar distillation. The work was published in Nano Letters.

In the HSSG approach, fabricated through "a one-step aerosol-assisted biosynthesis process," three continuous layers with different functions are incorporated into the structure: a light-absorbing layer of carbon nanotubes and bacterial cellulose (BC); a thermal insulation layer of glass bubbles and BC; and a wood substrate providing support and facilitating the transport of water.

According to USTC, the hierarchical structure of nanocomposites is grown on the wood substrate and tightly combined with it through a network of BC nanofibers, which crosslink with the cellulose in wood to act as a strong binder. This provides the structural foundation for both thermal insulation and fast water transportation from the wood to the BC nanocomposite layers, while the interlaced structure of carbon nanotubes and BC that forms the top of the structure allows the nanotubes to function as solar absorbers.

"This multilayered structure of wood, glass bubbles/BC and carbon nanotubes/BC is designed to achieve fast water transportation, thermal management, effective light absorption and reduced vaporization energy consumption," commented the USTC team. "The nanomaterials are assembled with BC nanofibers produced by bacteria in situ to form nanocomposites. Using this method, we construct functional BC nanocomposites inside and on the natural porous structure of wood."

In trials, an evaporation rate of 2.9 kg m2 h1 was recorded, equating to a solar-to-vapor efficiency of 80 percent and attributed to the biomimetic design, hierarchical structure and reduced vaporization enthalpy of the HSSG approach.

The project also modeled the structure's behavior in detail, and plotted the relationship between evaporation rate, energy efficiency and energy consumption of evaporation. This theoretical analysis method is potentially valuable for analyzing the contributions of different functional parts of solar steam generator devices, according to the team.

Alternative methods for driving water purification with light are under development, often involving similar principles of nanostructured surfaces over which water can be transported or thinned out into readily evaporated layers under solar illumination.

Another CAS team reported in Nature Communications earlier in 2020 that it had developed a biomimetic design modeled on the way that birds use their beaks to siphon water from a pitcher plant. The resulting solar evaporator allows efficient desalination of water through a localized crystallization operation.

A US Army Research Office project has used laser processing to modify aluminium surfaces into "black aluminium," making it both highly absorptive and super-wicking. The blackened surface is said to retain nearly 100 percent of the energy it absorbs from the sun, to rapidly heat the water and increase the efficiency of the evaporation process.

The new HSSG nanotubes and cellulose approach by USTC could ultimately form part of solar distillation processes designed to separate water and contaminants, according to the project.

"Compared with other technologies of solar powered water purification, HSSG has great advantages on evaporation rate, energy efficiency, sustainability and cost," noted USTC. "These make it a promising technology for future water purification."