In this attendee-favored plenary, Laura Waller describes how her computer-based approach to imaging could replace bulky, expensive optical tools. 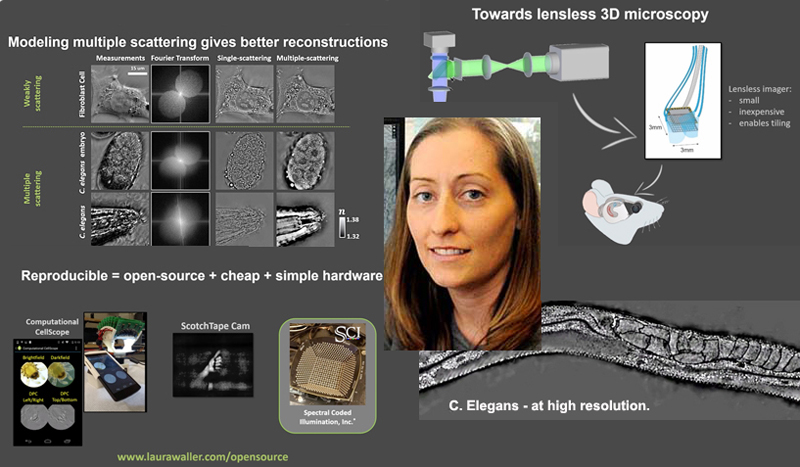 Photonics Europe Digital Forum plenary speaker Professor Laura Waller, a computer scientist and Ted Van Duzer Endowed Associate Professor at the University of California, Berkeley, made a popular presentation on computational imaging at this month’s digital event, which has been viewed and downloaded many hundreds of times within the first two weeks.

Her group’s research covers optics, signal processing, computer algorithms and system design. Her approach is, “Optical waves can be treated in a signal processing framework, where optical beams are represented as complex fields split up into spatial frequencies and temporal frequencies. We are working to measure and control all of these parameters for better imaging systems.”

Waller explains, “Traditionally, one must trade field-of-view for resolution; with our methods we can have both, resulting in gigapixel-scale images with resolution beyond the diffraction limit of the system. Our reconstruction algorithms are based on large-scale nonlinear non-convex optimization procedures for phase retrieval.”

“This new generation of cameras integrates computers as a part of the imaging system, whereby the optical setup and post‐processing algorithms are designed simultaneously. For example, one can digitally refocus images, enhance resolution or recover 3D. We focus in particular on large-scale multi-dimensional imaging and inverse problems that incorporate wave-optical effects, such as phase, diffraction, and coherence.

“Our research is inherently interdisciplinary, drawing from expertise in optical physics, signal processing and computer science, with broad applications in bioimaging, defense, physical science and industrial inspection. We work with optical microscopes, consumer cameras and X-ray imaging systems, and we use algorithms of nonlinear non-convex optimization, compressed sensing and machine learning theory.”

Waller’s detailed and entertaining presentation covers a wide range of topics from the activities of her substantial group at Berkeley, including the following: development of [her group’s] Diffuser Cam, the idea that image reconstruction is nonlinear optimization, different approaches to image reconstruction (physics- and deep learning-based methods); 2D and 3D imaging, how she is working towards lensless 3D microscopy.

Her presentation includes many references to cheap, home-made hardware to show how high quality images can be obtained from basic tools if the rough image is treated ingeniously. At one point she presents “Laura’s Law”, which states that “reproducibility [of outcomes] is proportional to the inverse of the number of pieces of duct tape used [in the experiment]”, which likely also applies to many first attempts at classical physics experiments.

But some of the images obtained by her group, such as the 3D interrogable rendition of the C. Elegans nematode worm are particularly impressive and justify viewing the whole rather entertaining, 45 minute-long, low-tech/high tech amalgamation.

About the Photonics Europe Digital Forum

During the virtual event, more than 750 online presentations were made, sharing cutting-edge research. Authors who had previously prepared to present their research in Strasbourg uploaded pre-recorded presentations and manuscripts.

There were over 750 presentations and 500 manuscripts available during the forum covering these exciting topics. These are now available for viewing on the SPIE Digital Library, alongside many thousands of other virtual presentations and other papers in the DL's archive.