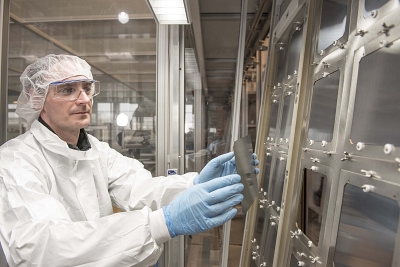 A research team at the Fraunhofer Institute for Solar Energy Systems (ISE) in Germany has identified several ways to improve the performance of perovskite-based solar cells.

Presenting the work as part of SPIE’s Photonics Europe Digital Forum this week, Jan Christoph Goldschmidt - head of a group working on novel solar cell concepts at the Freiburg laboratory - said that a combination of new layer structures and textured surfaces had substantially improved the efficiency of perovskite-tandem silicon cells.

Silicon limitations
Outlining the need for more efficient photovoltaic cells and modules in the battle to mitigate climate change, Goldschmidt described how the ISE team had developed a tandem cell with 25.2 per cent conversion efficiency - and models indicating a rise to 27.8 per cent with additional texturing to reduce reflection losses.

Although those figures have only been demonstrated with small, research-level devices, and are below the world record figure of 29.2 per cent set by a team in Berlin earlier this year, the progress indicates more ways that conventional silicon solar cells might be adapted with perovskite to push beyond their current limits.

Goldschmidt explained that although incremental improvements to mass-produced silicon cells were continuing to increase average conversion efficiency, by 2025 these would level off at approximately 26 per cent.

That is because the physics of silicon cells limits their standalone efficiency to an absolute maximum of 29 per cent, although that cannot be achieved in practice. To get beyond 26 per cent, and keep additional costs to a level compatible with deploying the tens of terawatts worth of solar power thought necessary to limit the global temperature rise to a manageable level, something else is needed.

Industrial production imminent
Perovskites look like they could provide the answer, by absorbing more of the short-wavelength solar spectrum than silicon is capable of. The material is also highly defect-tolerant, meaning that - unlike most other photovoltaic devices - perovskite cells can be produced using very-low-cost deposition techniques.

As a result, research into the material for solar applications has exploded over the past few years. UK firm Oxford Photovoltaics says it is on course to begin production this year at the world’s first volume manufacturing line for perovskite-on-silicon tandem cells, indicating that this effort looks to be migrating into the commercial realm.

“Overall, one has to say that the progress made in the field of perovskite-silicon solar cells is really tremendous,” stated Goldschmidt in his presentation. “With only four years [since] the proof of concept, we're actually beating silicon efficiencies and also at the edge of industrial production.”

Spray coating for texture
He admits that ISE, which has pioneered the development of high-performance multijunction cells based on compound semiconductor materials, has some catching up to do when it comes to perovskites.

But, using a new cesium-based perovskite absorber layer and an inverted layer structure, his team has passed the 25 per cent efficiency milestone and sees plenty more room for improvement.

Simulations now indicate that texturing the front surface of the cell will push that performance close to 28 per cent, and deliver an improved energy yield over the course of a year generating solar electricity - partly through improved current matching between the perovskite and silicon elements.

With tests indicating highly stable performance of the cell - and even slightly higher efficiencies after several months - the ISE team is now working to develop the optimum combination of spray coating and evaporation techniques to deposit the absorber layer.