CNRS project could help to link tumors' elasticity with the response to anticancer therapy. 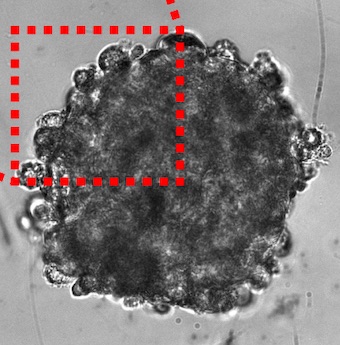 A growing tumor contains several different types of cell, but is fundamentally an elastic frame of cells formed into a cytoskeleton, through which interstitial and intracellular fluids pass.

Studying the mechanical properties of this structure can be one route to understanding the way that tumors grow, but could also potentially have a direct bearing on the development of anticancer treatments. Any weakening of the intracellular adhesion would be a way to affect a tumor's drug resistance, and allow therapeutic agents to penetrate.

A project at Institut Lumière Matière (ILM) and the Cancer Research Center of Lyon (CRCL), both part of the French CNRS national research organization, has developed an optical technique to assess the physical properties of tumors, which could help in the design of new anticancer molecules and the personalization of treatments. The work was published in Physical Review Letters.

Previous work at CNRS investigated the use of a laser to locally soften tumors as a way to enhance subsequent therapy, but the new project involves the direct mapping of a tumor's elasticity by optical means.

"Despite a good understanding of the biology of cancer, 90 percent of experimental drugs fail during clinical trials," commented the CNRS team, led by Thomas Dehoux. "It is increasingly suspected that the mechanical properties of tumors influence disease progression and treatment efficacy. Although we can evaluate tumor elasticity globally, it is more difficult to measure local rigidity deep down and to see whether the core of the tumor resists the penetration of therapeutic liquids."

The CNRS solution produces label-free imaging of the high-frequency elasticity and porosity properties of tumor micro-tissues using Brillouin light scattering (BLS) microscopy. BLS relies upon the change in refractive index that can be caused by compressive forces on a material, and the periodic grating of refractive index fluctuations that can effectively be created by infinitesimal compressive motion.

Thanks to the interaction between a light wave and the deformation wave in the medium, both reflection and scattering properties can potentially be altered at the point of compression.

The CNRS project tested its approach by creating spheroid aggregates from two different carcinoma cell lines, typically around 350 microns in diameter. A red laser beam was focused onto these objects, and infinitesimal vibrations of the sample caused by thermal agitation made slight modifications to the diffused light beam returning from the spheroid aggregates, as measured by a spectrometer.

This BLS spectrum creates a map of the mechanical properties of the model tumors. The more rigid the area, the faster the vibrations and hence the greater the color change.

When tested on organoids composed of two cell lines with different malignancies, the technique was able to distinguish the two cell types from their mechanical properties. This may be significant, if it ultimately allows a better assessment of tumor grade to be made from biopsy tissues.

Since the center of a tumor is known to remain rigid longer than the edge as an anticancer treatment takes effect, the mapping technique could be a means to visualize the treatment's efficacy gradient. Local measurement of mechanical properties may be able to confirm the total destruction of the tumor, and help in choosing as low a treatment dose and duration as possible, according to CNRS.

"We produce images of tumor micro-tissues based on the high-frequency viscoelastic modulus as a contrast mechanism," concluded the team in its published paper. "The modulus discriminates between tissues with altered tumorigenic properties. Our micrometric maps also reveal that the modulus is heterogeneously altered across the tissue by drug therapy, revealing a lag of efficacy in the core of the tumor. Exploiting high-frequency poromechanics should advance present theories based on viscoelasticity, and lead to integrated descriptions of tumor response to drugs."