University of Adelaide device could be used in health care, environmental monitoring and control of contamination. 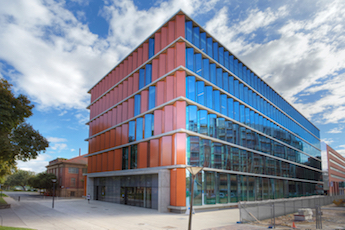 IPAS: one of the University of Adelaide's research institutes

An optical sensor platform developed by the University of Adelaide's Institute for Photonics and Advanced Sensing (IPAS) has demonstrated that it can measure the amount of carbon dioxide in a gas sample in under one second, with high accuracy and precision.

The IPAS sensor employs an optical frequency comb, a tool in which the spectrum of a laser source consists of a series of discrete, equally spaced frequency lines. Under the right circumstances, this approach can offer a combination of broad spectral range and fine resolution.

When this spectrum passes through a gas sample, the absorption pattern generated can act as a unique fingerprint of the composition of the sample.

"The ability to rapidly measure gas composition to such high accuracy is cutting-edge,” said Sarah Scholten, lead author of the IPAS study published in Physical Review Applied. "With further development, it opens the way for real-time and inexpensive monitoring and analysis that can be carried out in the field, or in the doctor’s surgery, by non-specialist operators."

In its published paper, the team reported using an optical-frequency comb to measure the concentration of carbon dioxide in a gas sample with an accuracy of better than one percent and a precision of 0.04 percent, in a measurement and analysis cycle of less than one second. The technique should be transferable to numerous other molecular species, according to the project.

"This first work aims at atmospheric monitoring. However, the technique is broadly applicable and offers an avenue for near-universal concentration measurements," commented Chris Perrella of IPAS.

One particular goal of the Adelaide group is to use the laser comb to unravel the chemical composition of exhaled breath, and perhaps reveal the chemical signs that point to underlying disease. The ultimate goal would be to use the laser-based sensor as a screening tool, and discover a serious illness even before the patient is aware of the condition.

This concept has been an attractive prospect for many years, especially when user-friendly mode-locked femtosecond fiber lasers became more readily available, but still represents an analytical challenge.

"The exhaled breath is a rich source of information about the inner life of the human body, but untangling this complicated molecular mixture into a quantitative measurement of its constituent components is currently an unsolved problem," noted the Institute's project website.

"By combining a frequency comb source with an innovative parallel detector and a highly sensitive sampling system, we can generate a real-time spectral signature of the sample. Computational techniques developed by the radio astronomy community will then be used to extract concentrations of individual molecular components at the parts-per-billion level."

Beyond medical diagnosis, the same analytical principle could also be applied to environmental monitoring tasks, or the detection of industrial contamination.

IPAS, one of five designated research institutes at the University of Adelaide, was officially launched in 2009 and led by Founding Director Tanya Monro until 2014.