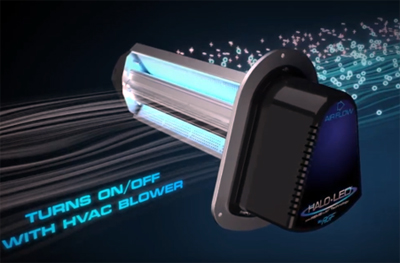 Seoul Viosys, a developer of UV LED technology and a subsidiary of Seoul Semiconductor, announced this week that customer inquiries for its Violeds UV LED products, which can be used for sterilizing bacteria, increased more than five times over the previous month, fueled by concerns over the continuing global spread of the coronavirus (Covid-19).

With growing concerns over the global spread of the coronavirus, numerous automotive companies in China are actively reviewing adoption of Seoul’s violeds UV LED technology in sterilization systems for vehicle interiors, it adds. Violeds UV LED technology has also been used by the US National Aeronautics and Space Administration (NASA) aboard the International Space Station (ISS) to provide a healthy, germ-free environment for astronauts.

For example, Seoul’s violeds UV LED technology has been adopted by Maltani, the largest Korean lighting company, for sterilization lighting applications, and by RGF Environmental Group, an in-duct air treatment supplier in the U.S., known for its Halo-LED indoor air quality system, launched in November of 2019.

Until recently, many companies have been conservative in their adoption of UV LED technology, says the company, "because conventional UV LEDs typically had a short lifetime (10,000 hours) and high cost." However, Seoul Viosys has improved the lifetime of its violeds UV LED to more than 50,000 hours, similar to visible LEDs used for general lighting applications, and increased production capacity to achieve cost competitiveness.

“Seoul Viosys is committed to developing technology that protects human health and creates a cleaner world, and we have long been involved in developing UV LEDs for innovative biomedical and agricultural applications,” commented CEO Chung Hoon Lee, CEO of Seoul Semiconductor, which established Seoul Viosys 18 years ago to develop UV-LED technology in strategic partnerships with Japanese and U.S. companies.

“Through innovation, sustained research and development, and manufacturing experience, we were able to improve the lifetime of UV LEDs up to 50,000 hours and significantly reduce product cost. We hope that Seoul’s violeds UV LED technology will help protect human health and create a cleaner world in the face of the current health situation.”