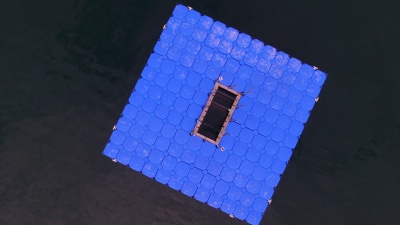 Marine fouling on ship hulls is a major problem for the industry. This so-called biofouling increases the flow resistance and thereby the fuel consumption and emissions. Laser Zentrum Hannover has announced it is developing a laser-based cleaning process alongside Laserline GmbH and the Fraunhofer Institute for Manufacturing Technology & Applied Materials Research (IFAM). Their aim is to gently and efficiently remove the vegetation without damaging the underlying coating.

In addition to ship hulls, other maritime technical surfaces, such as the foundation structures of offshore wind energy, gas and oil platforms, sheet piling in ports, tidal power plants or aquaculture network cages are also affected by biofouling.

In the “FoulLas” research project, the project partners are aiming to use laser radiation to kill and remove the vegetation underwater in a way that is both environmentally friendly and safe on the surface. Existing paint-based antifouling and corrosion protection systems as well as the material layers themselves should not be damaged.

The research partners are developing a process in which the vegetation's cells are damaged in such a way that, ideally, the water flow washes away the remaining material. Compared to mechanical cleaning processes, it should be possible to clean ships more efficiently and more gently, and thus to keep the flow resistance low. This would significantly reduce fuel consumption and ultimately emissions, says LZH. 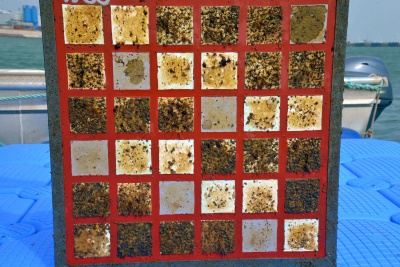 Testing of anti-fouling coatings on the Heligoland test stand.

For realistic investigations, the tests are carried out in the south harbor on the island of Helgoland, where Fraunhofer IFAM operates a test bench for growth tests. During the multi-year project period, seasonal influences can also be mapped in the real laboratory.

The project "Fouling removal of maritime surfaces using laser radiation underwater - FoulLas" is funded by the Federal Ministry for Economic Affairs and Energy (BMWi) via the project coordinator Jülich under the grant number 03SX489.

Fraunhofer IFAM is described as "one of the most important research institutions in Europe for adhesive bonding technology, surfaces, shaping and functional materials."

At the institute’s six locations Bremen, Dresden, Oldenburg, Stade, Wolfsburg and Braunschweig as well as at the Test Center for Martime Technologies on Heligoland, scientific excellence, a focus on the application of technology, measurable utility for customers and ensuring the highest quality are the core guidelines of the institute.