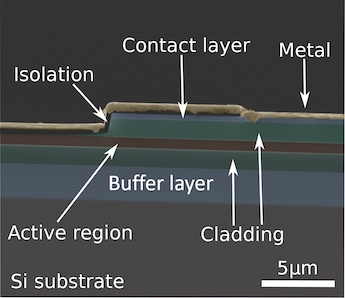 A group at the University of Montpellier's Institute of Electronics and Systems (IES) has demonstrated mid-IR semiconductor lasers grown expitaxially on an on-axis silicon substrate, said to be the first fabrication of such diodes on microelectronics-compatible silicon material.

The breakthrough could be a step towards the integration of semiconductor laser sources on Si for smart sensor platforms, allowing environmental sensing for applications such as air pollution monitoring, food safety analysis, and detecting leaks in pipes. The work was published in Optica.

"Most optical chemical sensors are based on the interaction between the molecule of interest and mid-infrared light," said research team leader Eric Tournié from the University of Montpellier.

"Fabricating mid-infrared lasers on microelectronics-compatible silicon can greatly reduce their cost, because they can be made using the same high-volume processing techniques used to make the silicon microelectronics that power cell phones and computers."

Montpellier researchers had previously demonstrated lasers on silicon substrates, but those substrates were not compatible with industry standards for microelectronics fabrication. When the assembly operations were applied to industry-compatible silicon, differences in the material structures of the silicon and the III-V semiconductor caused defects to form.

"A particular defect called an anti-phase boundary is a device killer, because it creates short-circuits,” said Tournié. “In this new work, we developed an epitaxial approach that prevents these defects from reaching the active part of a device."

In its published paper, the team comments that the improved properties of laser diodes grown on on-axis Si through its bespoke epitaxial process is down to a combination of factors, including the adoption of inductively coupled plasma etching into Montpellier's existing operation to replace wet etching, as well as the steps taken to ensure no anti-phase boundaries in the structure.

Control of the fabrication process

The researchers demonstrated the new approach by producing mid-infrared laser diodes operating in continuous-wave mode, and found that the diodes were capable of exhibiting low optical losses in use.

"These GaSb-based laser diodes demonstrate low threshold current density, low optical losses, high temperature operation, and high characteristic temperatures," commented the project. "This epitaxial approach can be applied to any GaSb-based optoelectronic devices, including interband- and quantum-cascade lasers, and photodetectors. It represents a breakthrough in view of the fabrication of fully integrated mid-IR sensors."

Once the new technique is fully mature, epitaxy of lasers on large silicon substrates up to 300 millimeters across using silicon microelectronics tools could help to improve control of the fabrication process, ultimately reducing laser fabrication costs and enabling the design of new devices.

The lasers could then be combined with passive silicon photonics integrated circuits or CMOS technology, as a route to creating small, low cost, smart photonic sensors for gas and liquid measurements with high sensitivity, according to the university.

"The semiconductor material we work with allows fabrication of lasers or photodetectors operating in a broad spectral range, from 1.5 microns to 25 microns, telecom band to far infrared," said Tournié.

"Our fabrication method can be applied in any field where one needs to integrate III-V semiconductors on silicon platforms. For example, we have already fabricated quantum-cascade lasers emitting at 8 microns by applying this new epitaxial approach."