System shows how concentration of combustion gases differs, depending on the type of explosive used in a bomb. 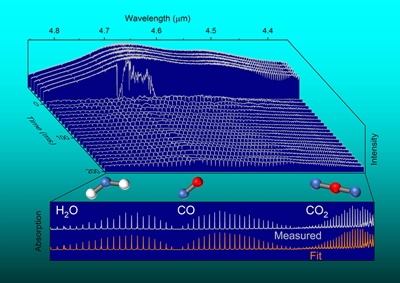 A team of researchers in the US has demonstrated that quantum cascade laser (QCL) absorption spectroscopy is able to characterize the different levels of combustion gases created when explosives of different types are detonated.

Mid-infrared spectroscopy
Mark Phillips, an associate research professor at the James Wyant College of Optical Sciences in Tucson, Arizona, and co-author on a new paper describing the work, explains that a swept-wavelength external-cavity (EC) QCL source has provided a new way to probe explosions.

Operating in the mid-infrared spectral region (4.35-4.88 µm) and 100 Hz operation, the spectroscopy system can measure the concentrations of the combustion gases carbon monoxide, water, carbon dioxide, and nitrous oxide (N2O) every two microseconds.

The study looked at four types of high-energy explosives, all placed in a specially designed test chamber to contain the fireball. Detailed analysis yielded temperature information and concentrations of the various gases created by each explosion, despite the light-attenuating effects of soot.

Among the explosive materials used were pentaerythritol tetranitrate (PETN), a major ingredient in Semtex, and whose colorless crystals are regarded as difficult to detect. The team also probed explosions from a polymer-bonded material called PBXN-5, TNT-containing “Comp-B”, and a combination of nitromethane and ammonium perchlorate (NM-AP).

Combustion gases
According to the results published in the Journal of Applied Physics, “significant” CO gas was generated by all the explosives tested, with PBXN-5 and PETN showing the highest concentrations and NM-AP the lowest. CO2 gas concentration was found to be highest with PETN, and also lowest with NM-AP.

“It is also apparent that the ratio of CO to CO2 varies between explosive types,” report Phillips and his colleagues in their paper. “Another observation is that the N2O concentration appears highest for PBXN-5, which is consistent with the higher nitrogen content of the HMX explosive [a nitroamine compound] used in PBXN-5.”

Summing up the work, they note that the results represent an “initial investigation”, but one that should open up lots of future studies. “Correlation of absorption and emission signals in the infrared to measurements in UV/VIS/NIR spectral regions will be of great value,” they write.

Phillips is also the VP of research at Albuquerque-based Opticslah, a 2015 startup company specializing in laser spectroscopy and sensing technologies where efforts to commercialize the swept-ECQCL are under way.

Aside from probing explosive fireballs, the swept-frequency laser system is expected to find applications in standoff chemical plume detection, and trace gas sensing.