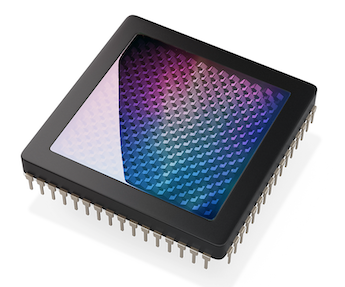 A lidar platform said to be less expensive to manufacture and potentially more efficient than existing systems could make an impact in the world of autonomous vehicles, according to Washington state-based start-up Lumotive.

The company, which numbers Bill Gates among its seed-funders, has unveiled prototypes of its core technology and intends to commence shipping production samples from the third quarter of 2019, with the autonomous robo-taxis envisaged in the ride-sharing sector an initial target.

Most conventional lidar systems employ mechanical methods to direct light pulses in a desired direction and scan a laser beam around the area of interest, but the rotating mirror assemblies and related optical components can place a limit on the platform's performance and sensitivity.

The Lumotive system takes a different approach to beam steering, using a liquid crystal metasurface (LCM) to create a beam-steering chip. An incident laser beam is reflected by the chip in a programmable direction, determined by the electronic configuration of the metamaterial elements on the surface of the component.

Optical metasurfaces, first developed a decade ago, make use of sub-wavelength patterned layers to alter the properties of incident light thanks to the scattering effects of carefully designed nanostructures, rather than through conventional refraction and propagation.

"The LCM chip is the holy grail of lidar, finally enabling beam steering using a semiconductor chip, but efficiently and over a large optical aperture that is hundreds of times larger than a MEMS mirror or an optical phased array," said Lumotive co-founder and CTO Gleb Akselrod. "Our large aperture is like having a bigger telescope, allowing us to see dramatically farther than other systems."

The company's proprietary technology is said to allow a lidar system with a large optical aperture of 25 x 25 millimeters to enhance the system's range; 120-degree field-of-view with high angular resolution; and rapid random-access beam steering. The economics of semiconductor manufacturing should also help to keep the cost of such LCM systems down.

"In the past, these concepts have been applied to radio waves, but Lumotive is the first to develop dynamically tunable metamaterials for optics. Their development is a tremendous advance in metamaterials research, as well as a breakthrough technology that addresses pressing and unmet needs in LiDAR and other optical systems."

The Lumotive technology builds on research at Duke University, where Akselrod was a postdoctoral fellow, and on the development programs at Intellectual Ventures, a private research and prototyping laboratory based in Washington state where Akselrod led a program on the commercialization of optical metamaterials.

Lumotive was spun-out as its own company, with an undisclosed amount of seed funding from Gates among other backers, in 2017 as Holosense Technologies before renaming as Lumotive in 2018. It is currently undertaking a Series A funding round to support its activities.

The potentially lower cost and higher performance of LCM lidar platforms could help to promote the technology's adoption in a number of markets including robotics and automation, but most observers see the largest near-term application in automotive markets, where such autonomous driving systems are likely to be deployed first by self-driving taxi services.