On the 50th anniversary of the first Moon landing, NASA backs a plan to deploy more retroreflectors on the lunar surface. 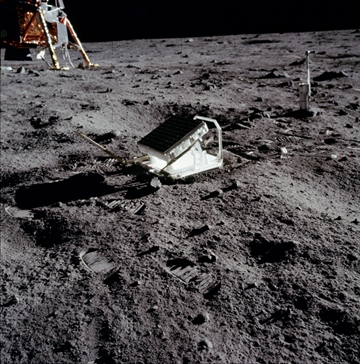 One of the best-known experiments conducted as part of the Apollo lunar missions is to be repeated with upgraded optics, after NASA said it would support the development of next-generation retroreflectors.

Announced shortly before the 50th anniversary of the Apollo 11 landing, the “Next Generation Lunar Retroreflectors (NGLR)” effort will once again look to measure the distance between the Earth and the Moon – this time with greater precision.

Apollo 11 deployment
The original lunar retroreflector was deployed on the surface of the Moon by astronauts Neil Armstrong and Buzz Aldrin during the Apollo 11 landing of July 20, 1969, close to the end of their six-hour visit.

Placed about 100 feet from the Eagle lander, the corner-cube reflector optic comprises 100 individual mirrors, and measures around two-feet wide.

Now Douglas Currie, an emeritus professor and physicist at the University of Maryland (UMD) – and part of the team that designed those original retroreflectors – will serve as principal investigator for the follow-up effort.

The investigation is being funded under NASA’s new “Artemis” lunar program, which is aiming to return astronauts to the Moon by 2024.

According to a UMD report published last week, Currie believes that the new retroreflectors will be capable of improving the accuracy of the ranging experiment by a factor of 100.

The existing retroreflectors have all been used to measure the Earth-Moon distance, by firing a laser pulse off of them and measuring the time it takes to pick up the reflection. With advances in technology, the accuracy of that measurement has improved by around 200 over the past 50 years. 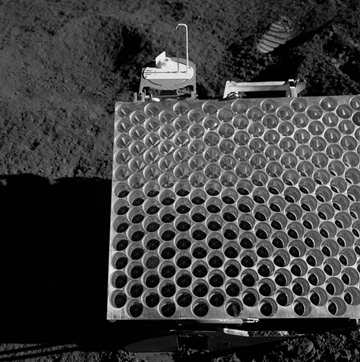 Sub-millimeter precision possible
As well as setting a new standard for the Earth-Moon distance measurement, the new investigation will help scientists working on fundamental studies, including theories of gravity, and the nature of the so-called “dark matter” that appears to make up more than a quarter of the mass of the universe but whose precise nature remains a mystery.

Using the existing retroreflectors, scientists have been able to measure the approximately 385,000 kilometer Earth-Moon distance to a precision of just a few centimeters.

According to NASA, that work has shown that the Moon is drifting away from Earth at a rate of approximately 4 centimeters every year.

As well as working on the original lunar retroreflectors, Currie was part of the team that developed the main camera on board the Hubble Space Telescope, before going on to develop software used to process adaptive optics data collected by the Very Large Telescope (VLT) in Chile.

In recent years, he has been investigating ways to improve lunar laser ranging by limiting thermal effects, as well as the impact of dust and the Earth’s atmosphere.

While the accuracy of current lunar ranging stands at around one millimeter, it is thought that anchoring the retroreflectors into around half a meter of lunar rock will reduce thermal effects sufficient to support a ranging accuracy of tens of microns.