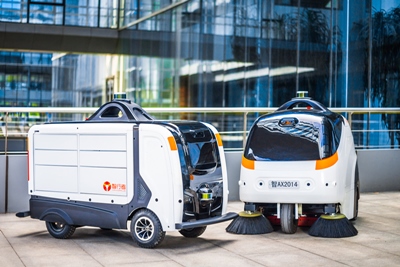 Velodyne says it has a strategic partnership with Idriverplus that will help deliver mass production of commercial autonomous vehicles, which will ultimately include passenger cars and logistics vehicles, as well as the road-sweepers.

Idriverplus CEO Zhang Dezhao added: “We have a vision for the future that autonomous driving is not only a means of transportation, but also a necessity of life.

“Lidar is indispensable in our development of autonomous driving technology. Velodyne Lidar’s products have better performance and stability in practical use, and their accuracy addresses our demanding requirements.”

Level 4 developments
Known as “Viggo”, the Chinese firm’s road sweeper is an unmanned electric vehicle. As it cleans, Viggo automatically tracks and avoids obstacles. More than 100 units are now said to be in operation at universities, factories, parks, an amusement park and city streets - with deployments in Beijing, Tianjin, Shanghai, Hebei, Zhejiang, Henan, Hunan and other provinces and cities.

And the technology appears to be proliferating. Idriverplus says it also has strategic co-operation partnerships in Singapore, Dubai, Malaysia, and other locations in Asia.

The company is also developing commercial autonomous cars for personal transportation. One is a “Level 4” vehicle that provides autonomous driving in closed parks and some public roads, and features an advanced driver assistance system (ADAS) for automatic parking.

Idriverplus adds that its driverless vehicles have now clocked up in excess of 400,000 kilometers, said to greatly surpass its domestic rivals.