Eye tracking, facial recognition system to be applied to commercial vehicles in Korea to boost safety. 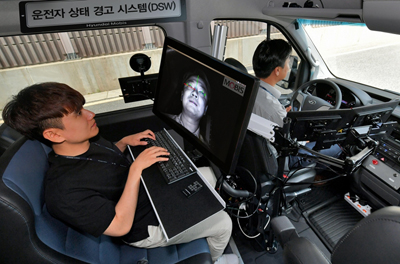 Both recognizes a driver's face and tracks eye movements.

Hyundai Mobis, which supplies parts to 57 million Hyundai and Kia Motors vehicles worldwide, has developed an optical driver state warning system that recognizes a driver's face and can track their eyes. The system is expected to contribute to preventing big traffic accidents caused by careless driving.

The so-called Driver State Warning (DSW) system, which accurately analyzes the driver's facial biometric data and warns about careless driving situations, will be supplied to mid- and full-sized commercial vehicles for the first time in Korea by 2021, says Hyundai, which is the third largest vehicle manufacturer in the world.

Existing driver state warning systems, which have already been applied on a limited basis to certain premium sedans and commercial vehicles, have been restricted to recognizing the orientation of the driver's face and whether the eyes are open or closed.

The developer says that the new DSW system is “the most advanced-in-class product that offers a new level of careless driving detection accuracy through driver identification based on facial feature points such as eyes, nose, mouth and ears as well as eye tracking through pupil recognition.”

The new driver identification feature supports registration of multiple drivers. With this system, Hyundai Mobis is considering connecting it with personalization features such as automatic adjustment of seats and mirrors. 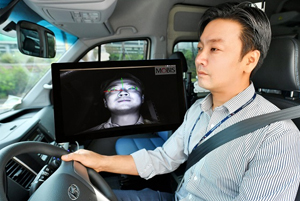 Globally, says Hyundai, systems of this level have hardly yet been applied to sedans and not mass-produced for commercial vehicles. The new system combines driver state data captured from an indoor camera with chassis data such as speed, transmission and handling for analysis, offering what the company calls “a higher level of reliability.”

The launch announcement states, “This is state-of-the-art technology that recognizes the driver's face with an infrared camera installed in the vehicle and detects careless driving caused by drowsy driving, distraction and fatigue.