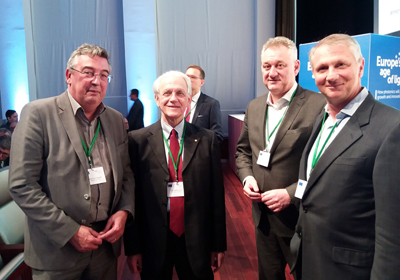 European photonics platform Photonics21 has published a position paper saying the continent’s photonics industry has a commitment to “invest up to €100 billion in R&I throughout the next scientific research initiative, Horizon Europe, 2021-2027.”

This investment over the seven year period could work in tandem with a new Photonics Public Private Partnership, which Photonics21 is lobbying for and hoping will be agreed by the European Commission.

The Photonics21 paper argues the move is “essential for the digital transformation based on deep technologies, and for Europe to remain competitive in the face of ambitious funding for photonics from China, South Korea and America.”

Photonics21 Vice President Bernd Schulte commented, "We firmly believe that Europe needs to become more ambitious now and match the aspiring investments from other regions of the world in deep technologies to stay competitive. The photonics industry is willing to team up with the European Commission and jointly invest in the future of Europe."

optics.org asked Photonics21 how it has arrived at the significant round number of €100 billion ($113 billion), which the association expects would be invested by European industry between 2021 and 2027. Photonics21 responded: “The value of European photonics production in 2015 was about €67 million in 2015. Given an average long-term growth rate of 5%, turnover would increase to about 90 million in 2021. The 14.4% spending and investment on turnover in the course of Horizon 2020 will reach an investment level of more than €90 billion by 2021.

“Given that this investment level will be achieved at the end of H2020, we are confident the €100 billion level is achievable by the end of Horizon Europe.”

Photonics21 is to ask the European Commission to facilitate a Horizon Europe Photonics Partnership that doubles the previous PPP’s annual commitment to €200 million, or €1.4 billion over the course of the next seven year research funding initiative (known as Horizon Europe).

Photonics21’s proposal paper also notes that four recent Nobel Prizes have been awarded to European scientists for their work in photonics, underpinning the platform’s claim “that Europe is in a good position to accelerate advanced initiatives – such as AI, High-Performance Computing, Quantum Communication, Quantum Computing, and Smart Cities”, which all depend on photonics as the key enabling technology.

optics.org also put it to Photonics21 that the new position paper is, in effect, a pointed proposal to the EC to encourage it to agree to a new Photonics PPP within Horizon Europe.

Photonics21 replied: “Exactly right, it is a proposal to encourage the EC and all other associated decision makers in this process to form a new PPP. In simple terms, here’s what we, the photonics industry, did during Horizon 2020. We will commit to at least the same, or slightly higher as long as you [the EC] can pledge a higher basic funding.”

“We are confident, and this was strongly supported by three Nobel Laureates from the area of photonics, that due to the great capacity photonics has to meet the industrial and societal challenges we are facing, light technologies will play an essential role for the future European economy and society.”