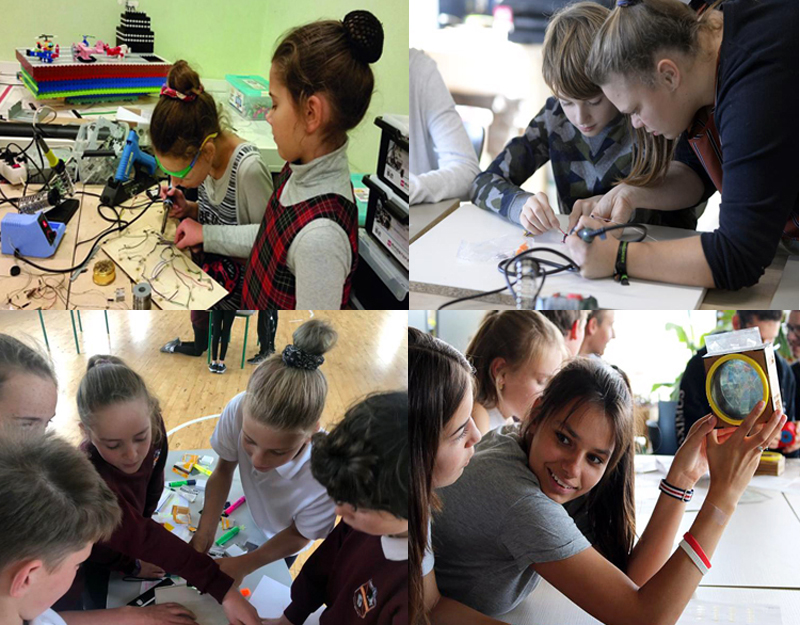 Encouraging: PHABLABS 4.0 aims to achieve a positive impact on the way photonics is integrated into European Fabs.

Thousands of young women and girls have had the chance to explore the world of science, engineering, and light technologies thanks to a European photonics research consortium that encouraged female participation into a so-called “STEM ecosystem.” This has comprised a series of 33 workshops and 11 Photonics Challenger projects across 10 European countries over the past year, which has the objective of tackling the underrepresentation of women in science.

According to the UNESCO Institute for Statistics (UIS), less than 30% of the world's researchers are women. However, a new outreach project has been tackling this underrepresentation by engaging young female minds with STEM, in the hope that they will pursue a career within the photonics, science or engineering.

Staged in ten countries across Europe, a total of 1221 girls have attended the Phablabs 4.0 initiatives since last year. The workshops create novel and innovative problems for students to solve using lasers and photonics.

Combining a ‘Fab Lab’ – or a fabrication laboratory - with the world of photonics, the workshops and Challenger Projects offer a glimpse into careers in photonics, engineering, computer coding, and robotics, say the Phablabs promoters.

Students have been exploring tasks as varied as creating an artwork made from lasers, modifying a cuddly toy with photonics, or building an infrared glove that acts as a remote control where touching two fingers creates a signal.

The more advanced Challenger Projects have tasked students with building an Invisibility Cloak or creating their own hologram. Some students, like Ester Muylaert, 18, from Halle, Belgium, are really excited to discover material they would not learn anywhere else.

“Phablabs is amazing and interesting. We’ve learned lots of new skills that we wouldn’t have picked up in school. To see the job in front of me and to meet the person who does that job has given me loads of ideas about what I can do in the future. It’s really made me want to work with photonics.”

One of the results of the PhabLabs 4.0 project has been the publication of a new booklet, A Gender Balanced Approach. The booklet acts as a guide to future Fabrication Laboratories so that organisers in schools or universities can use it as a reference to gain the interest of girls and young women in science and technology.

By creating gender-sensitive material for the workshops and “Photonics Challenger Projects” the organisers have garnered the interest of girls and young women in science, to generate a lasting impact on their personal relation to STEM and Fab Labs.

Supported by the Gender Action Team, the developers have had the backing of the European Commission with funding from Horizon 2020, and support from a number of professionals such as Professor Averil MacDonald from WISE (Women in Science and Engineering) .

“We are delighted to be able to open a door into a world of science that some girls and young women may feel is closed,” Professor MacDonald said. “Girls and young women are more likely to consider studying STEM subjects beyond age 16 if they see that the subject keeps their options open.”

“The STEM sectors can only benefit from the talents of these young women. More girls and young women deserve the chance to have successful and satisfying careers in science, technology, engineering, manufacturing, mathematics and construction,” said Professor MacDonald.

The resources are available as an open resource toolkit for educators to use with their students.