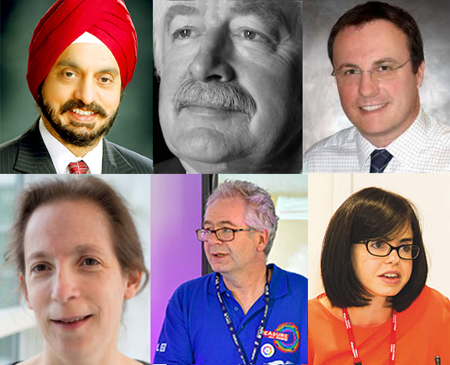 On June 8th, the birthday of the UK’s Queen Elizabeth II, more than 1,000 people across the country were honored for their good works and public service. This year’s recipients included leading figures from science and industry – including several working in optics and photonics.

Awarding the honors (full list here), which rank from the highest Commander of the Order of the British Empire (CBE), through Officer- (OBE) to Member- (MBE) and other categories, is an annual tradition associated with the Queen’s so-called official birthday; her actual birthday is April 21st.

Two individuals working in optics and photonics were awarded the Commander of the Order of the British Empire (CBE). Professor Harminder Singh Dua, professor of ophthalmology and visual sciences at the University of Nottingham was recognized for services to eye healthcare, to health education, and to ophthalmology.

Professor David John Southwood, recently retired chair of the UK Space Agency, was recognized for services to space science and industry in the UK and Europe. The CBE is awarded for a prominent role at a regional level. Professor Southwood was also President of the Royal Astronomical Society from 2012-14.

Dr. Christopher Dorman, Vice President Coherent, Scotland, received Officer of the Order of the British Empire (OBE), for services to laser and photonic technology and to exports. The OBE is awarded for a major role in a business, public, or not-for-profit sector.

Helen Margolis, Head of Time and Frequency at NPL, has been awarded an MBE for her services to metrology. Her particular area of research expertise is optical frequency metrology using femtosecond combs, part of NPL’s research program to develop a new generation of high accuracy optical atomic clocks based on laser-cooled trapped ions and atoms.

Andrew Richard Hanson, coordinator of science ambassadors at National Physical Laboratory, was awarded Member of the Order of the British Empire (MBE) for services to STEM education.

Dr. Jessica Alice Feinmann Wade, a research physicist at Blackett Laboratory, Imperial College London, was awarded Medallist of the Order of the British Empire (BEM), for services to gender diversity in science. The BEM is closely related to the MBE and is granted in recognition of meritorious civil or military service.